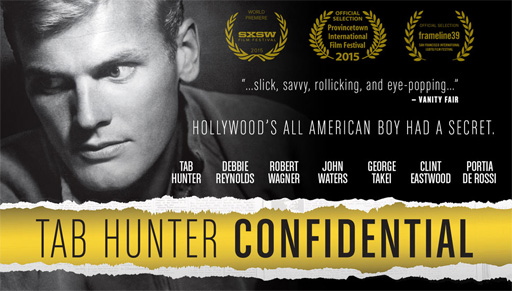 Throughout the 1950s, Tab Hunter reigned as Hollywood’s ultimate male heartthrob. In dozens of films – and in the pages of countless movie magazines – Tab’s astonishing looks and golden-boy sex appeal drove his fans to screaming, delirious frenzy, making him the prototype for all young matinee idols to come.

Bristling against being just another pretty face and wanting to be taken seriously, Tab was one of the few to be able to transcend pin-up boy status. He earned his stripes as an actor to become a major movie star and recording artist.

But throughout his years of stardom, Tab had a secret. Tab Hunter was gay, and spent his Hollywood years in a precarious closet that repeatedly threatened to implode and destroy him. Now, Tab’s dramatic, turbulent and ultimately inspiring life story has become an explosive documentary feature directed by Emmy award winning filmmaker Jeffrey Schwarz.