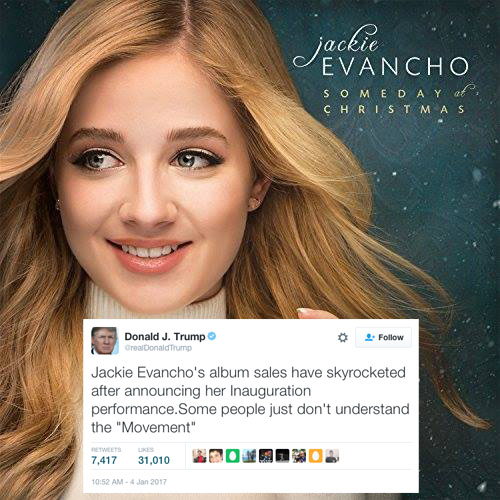 President-elect Donald Trump tweeted today (for a change) that reality TV competitor/singer Jackie Evancho’s record sales have “skyrocketed” since agreeing to sing at his inauguration.

The tweet seems to indicate that folks are buying the youngster’s record because she agreed to appear at his January 20th shindig.

But Billboard isn’t so sure the Trumpster deserves all that credit:

On Wednesday (Jan. 4), president-elect Donald Trump posted on Twitter that Jackie Evancho’s album sales have “skyrocketed” since the 16-year-old singer was announced to be performing the national anthem at his presidential inauguration later this month. “Some people just don’t understand the ‘Movement,’” Trump wrote in praise of the opera singer.

Have Evancho’s album sales really soared since she was announced as the performer on Dec. 14? It depends on how loose your definition of “skyrocketed” is, although they have posted gains. Someday at Christmas, Evancho’s most recent studio album, sold 6,000 copies in the chart week ending Dec. 15, according to Nielsen Music, following its Oct. 28 release.

After Evancho was announced to be performing at the inauguration, however, Someday at Christmas bumped up to 11,000 copies sold in the week ending Dec. 22 (up a big 94 percent compared to the previous week). In the tracking week after, the album sank slightly back to 8,000 copies sold.

Furthermore, Evancho performed on the America’s Got Talent holiday special, which aired on NBC on Dec. 19 and re-aired on Dec. 29, and likely helped the album’s cause. Evancho became a star on AGT after placing second on its fifth season in 2010.

Oh – so after appearing on a big network holiday special, Evancho’s holiday record saw a jump in sales? Why, who’s ever heard of anything like that….?