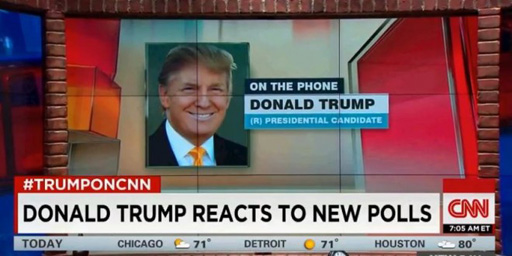 Donald Trump, speaking with CNN’s Chris Cuomo this morning, had a virtual meltdown over his media coverage as he sees his poll numbers dropping to number two as Dr. Ben Carson’s numbers rise.

Moments into his more than 20-minute interview on CNN’s “New Day,” Trump offered a broadside against a CNN reporter who covered his book signing in New York the previous day.

“Either she’s a very unemotional person or she’s not a very good reporter,” Trump continued, adding later, “Maybe she’s a low-key individual and doesn’t believe in showing the crowds.”

“I don’t know if that’s because she is incompetent, or she doesn’t like me or maybe she’s given instructions from up above. Who knows. I don’t really care,” Trump said.