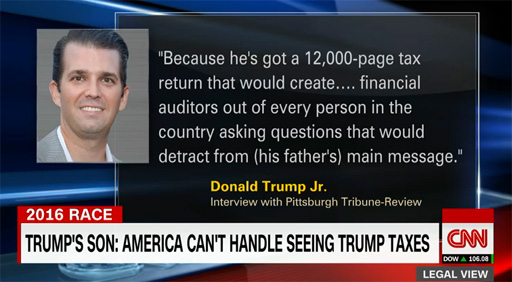 According to CNN, Donald Trump Jr. has let the cat out of the bag regarding the real reason his dad won’t release his tax records.

And it’s not because of an audit.

Donald Trump’s son argued his father can’t release his tax returns because that would allow voters to scrutinize them in a way that would detract from the candidate’s main message. That’s contrary to what the Republican presidential nominee has said about not releasing them because they are being audited.

Donald Trump, Jr. was asked by the Tribune-Review in Pennsylvania why his father won’t publicly disclose his tax returns as candidates in both parties — including rival Hillary Clinton — have traditionally done.

“Because he’s got a 12,000-page tax return that would create … financial auditors out of every person in the country asking questions that would detract from (his father’s) main message,” Donald Trump, Jr. told the newspaper in a piece published Wednesday.

The Republican nominee has said he is not releasing his tax returns because he is being audited by the Internal Revenue Service, although under law there is nothing that prevents a person under audit from disclosing their returns should they chose to do so.

Now, gee, what do you think could be in those tax returns that would “detract” from the Trumpster’s message?

By the way, Trump has also said that when “Hillary Clinton releases her emails” he would release his tax returns. So, the audit excuse is simply that – an excuse.