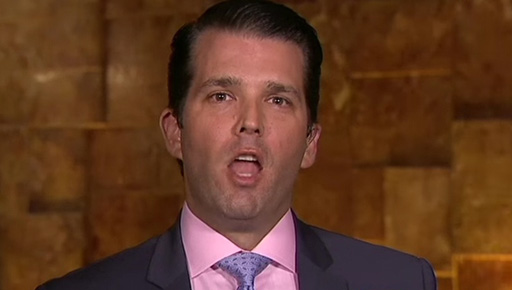 Speaking to Philadelphia Talk Radio 1210 WPHT, Donald Trump Jr. casually referenced the Holocaust as he explained that his dad, Republican presidential candidate Donald Trump, has been treated differently by the media.

“The media has been her number one surrogate in this. Without the media, this wouldn’t even be a contest, but the media has built her up. They’ve let her slide on every indiscrepancy, on every lie, on every DNC game trying to get Bernie Sanders out of this thing. If Republicans were doing that, they’d be warming up the gas chamber right now.”

That would be the media that has literally televised entire campaign rally speeches, and allowed Trump to call in to political shows for sheer convenience.

Trump Jr. later tolday NBC News’ Katy Tur that the “joke” was about “corporal punishment” and not the Holocaust. Although I don’t know how you mention “gas chambers” without invoking the Holocaust.