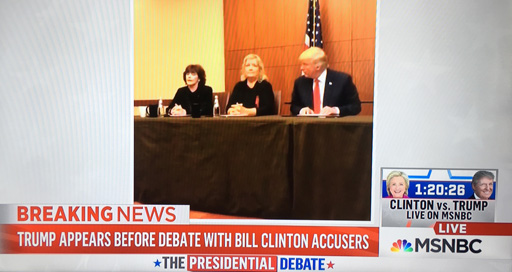 Just hours before he takes the stage for the 2nd presidential debate, he held a press event flanked by women who have accused Bill Clinton of sexual abuse decades ago.

This is wild, political drama, folks.

Donald Trump thinks he can defend his own boorish behavior by taking folks back decades.

It’s notable that President Clinton was impeached and found innocent back in the 90s.

The woman in the center of the above pic, Juanita Broaddrick, who initially accused Bill Clinton of a rape that she said occurred in 1978, but went on to sign an affidavit swearing no such event ever happened.

Years later, she recanted that affidavit.

How all of this relates to Hillary Clinton’s ability to serve as president I don’t know.

Flashback to when Donald Trump supported Hillary against these women.

Donald Trump in 1999: Hillary Clinton has “been through more than any woman should have to bear” https://t.co/60i3ieeXlL pic.twitter.com/BRuSG4TC7R