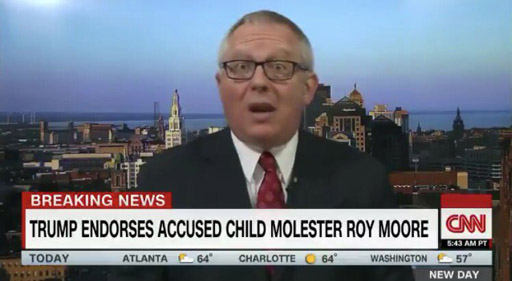 Donald Trump has wholeheartedly endorsed accused child molester Roy Moore in the Alabama Senate race to be held in 8 days.

“Just got off the phone with President Trump who offered his full support and said he needs a fighter to help him in the US Senate. I look forward to fighting alongside the President to #MAGA!” Moore wrote on Twitter, adding that the president exhorted him to “Go get ‘em, Roy!”

“The President had a positive call with Judge Roy Moore during which they discussed the state of the Alabama Senate race and the President endorsed Judge Moore’s campaign,” spokesman Raj Shah said.

Moore’s wife also crowed about the president’s call on Facebook.

“Judge Moore just got off the phone with President Trump — we have his full support! Thank you Mr. President! Let’s MAGA!” Kayla Moore posted.

Democrats refusal to give even one vote for massive Tax Cuts is why we need Republican Roy Moore to win in Alabama. We need his vote on stopping crime, illegal immigration, Border Wall, Military, Pro Life, V.A., Judges 2nd Amendment and more. No to Jones, a Pelosi/Schumer Puppet!

Just got off the phone with President Trump who offered his full support and said he needs a fighter to help him in the US Senate.

I look forward to fighting alongside the President to #MAGA!

You have been a endorsed by a man who has 34% approval. Congrats.— Brian Krassenstein🐬 (@krassenstein) December 4, 2017

How far America has fallen, where our accused sex offender President Trump endorses accused pedophile Judge Roy Moore and it doesn’t even feel like a big scandal.

Tan suits. Fancy mustard. These things used to get people up in arms.

President Trump-we see that you, as a person who has bragged about molesting many women without their consent, are supporting the pedophile judge Roy Moore.
You have at least 21 accusers between you, and the people of America are taking notes for 2018 and 2020.#NoAbusers pic.twitter.com/RK0iMlPeKL