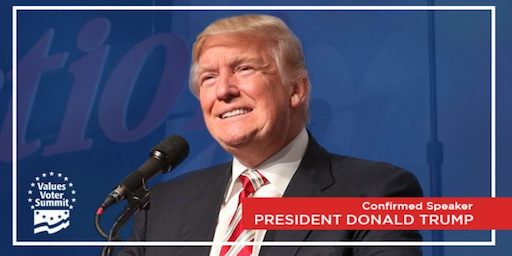 This is Trump’s third visit to the conference having spoken there in 2015 and 2016.

The Family Research Council has been named by the Southern Poverty Law Center as an anti-gay hate group for spreading false, harmful, and misleading information about LGBT people.

Virulently anti-gay Tony Perkins, the president of the FRC is reportedly behind the Trump’s decision to call for a total ban on transgender service members in the military.

Richard Cohen, the president of the Southern Poverty Law Centre, condemned President Trump’s decision to address the event. “By appearing at the Values Voter Summit, President Trump is lending the legitimacy of his office to a hate group that relentlessly demonizes LGBT people and works to deny them of their equal rights,” he told The Independent.

In addition to religious zealots, the event will host white supremacists and far-right activists, and feature speeches from such luminaries as departed White House advisers Steve Bannon and Sebastian Gorka.

After Trump talks about family values…

The president is addressing the Values Voter Summit today. Here’s what they’re giving guests in a swag bag: “The Hazards of Homosexuality” pic.twitter.com/eRufvSncc0

Trump touts anti-LGBT religious freedom guidance, says it will ensure “no religious group is ever targeted under my administration.”

Bonus bumble: While speaking to the crowd, Trump mentioned that he “met with the president of the Virgin Islands” after Hurricane Maria.

Ahem. He IS the president of the Virgin Islands.

Trump says he met with the “president of the Virgin Islands.”

*cough* he is the president of the Virgin islands, which is a US territory pic.twitter.com/8MLjqjTGb7