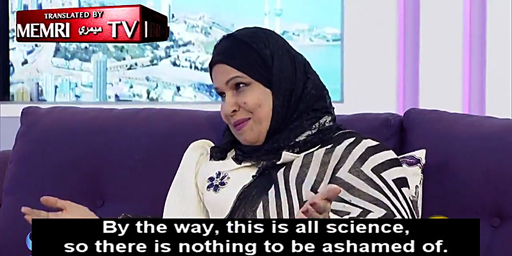 An anti-LGBTQ researcher in Kuwait, Dr. Mariam Al-Sohel, has announced to the world that she has invented a ‘cure’ for homosexuality.

“I discovered therapeutic suppositories that curb the sexual urges of boys of the third gender as well as the fourth gender, which is butch lesbians,” she explained on Scope TV, as reported by The Jerusalem Post.

The problem, she discovered, is those folks “have excessive sexual urges.”

I’ve never seen that as a ‘problem,’ but whatever…

“By the way, this is all science, so there is nothing to be ashamed of,” said the academic.

Well then, if its science…

She goes on to explain that her cure, based on “prophetic medicine,” comes in the form of a suppository and “cures those urges by exterminating the worm that feeds on the semen.”

The secret behind Al-Sohel’s ’science’ is that “bitter foods increase masculinity.” That said, it turns out the ingredients for her cure “are the same for both sexes.”

Not sure how that plays out as a ‘cure’ for her so-called ’fourth gender butch lesbians,’ but she made them different colors anyway.

I’m joking here only because it’s completely laughable that someone thinks any of this nonsense is real.

What’s not laughable is how LGBTQ people are treated in Kuwait.

Homosexuality is a criminal offense under the country’s ‘debauchery’ laws, as is cross-dressing. Being openly gay in Kuwait means possible prison sentences – long ones.

In fact, Kuwait is so anti-LGBTQ, Jerusalem Post reports that the National Cinema Company banned a ‘gay’ scene from the Disney film, Beauty and the Beast.