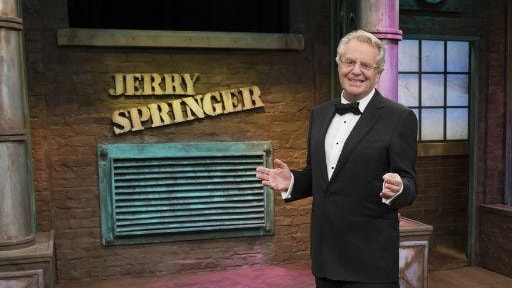 Apparently, The Jerry Springer Show has been airing for all these years? Who knew?

But after 27 seasons and 4,000 episodes, the long-running daytime talkshow which gave us wild-ass paternity test result reactions, stripper interviews, catfights and chairs tossed across the studio at guests has gone quietly into the good night.

The Associated Press reports NBC Universal quietly made the decision to shut down production.

For a show known for loud and wild antics, it’s ironic to see the series do anything “quietly.”

Premiering in 1991, the show began life as a serious ‘issues-oriented’ show with former Cincinnati mayor Jerry Springer handling host duties. What happened from there – we all know.

The show became so legendary that an opera was written and produced about it in London.

“I just do it because it’s fun to do,” Springer told ET in 2016. “And I’m not that good at golf. I think I’d go crazy [if I retired]. I’m always afraid not to be working. It’s psychological, I’m sure. If I ever have nightmares about something, it’s about not having a job, which is crazy, I know.”

Are you shocked the show has been cancelled? Or shocked it was still on the air?