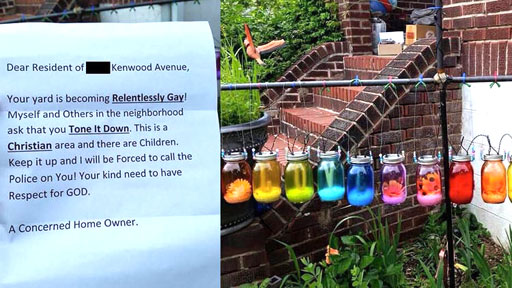 You’ll recall back in June, I reported on Baltimore resident Julie Baker, who seemed to have received a nasty note from a neighbor complaining that her front yard was becoming “relentlessly gay.”

The story went around and the next thing you know a crowdfunding campaign was launched to help the woman make her yard even MORE “relentlessly gay” because, rainbows.

Well, now it seems there may have been more to the story. Or less, perhaps. Like, the truth.

“Your yard is becoming Relentlessly Gay!” the note read. “Myself and others in the neighborhood ask that you Tone It Down. This is a Christian area and there are Children. Keep it up and I will be Forced to call the Police on you! Your kind need to have Respect for GOD.”

She quickly launched a fundraising effort to raise money to buy more rainbow swag for her yard, setting a goal of $5,000, which she exceeded by more than 150 percent in just a few days.

But it didn’t take long for some people to grow suspicious.

Shortly after her campaign went viral, it was observed that Baker’s GoFundMe page and the letter she allegedly received displayed the same improper use of capitalization. The letter incorrectly capitalized words such as “children,” “forced,” and “police.” Meanwhile, Baker’s GoFundMe page incorrectly capitalizes words such as “home” and “relent.” A closer look at her Facebook page found similar capitalization and grammatical errors in rants against right-wing Christians.

After being accused of lying, Baker suspended the campaign and issued a statement saying “the world is filled with hate and fear.” Now, she’s giving back all the money that was donated to her.

“It is with a saddened heart that all donations will be returned,” Baker wrote on the page shortly before deleting it earlier this week. She cited “taxes and an overabundance of resources” as her reasons for doing so.

She continued: “If a time machine were available, it would have all ended at the original requested amount. It was never about the money but being happy in the face of intolerance.”

So, in the end, we don’t really know if the whole escapade was true or not.

However, Baker has now requested that the funds be donated to charity.