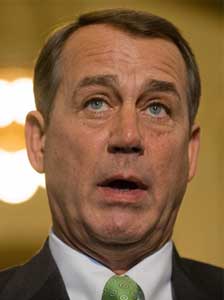 From Politico: House Republicans delayed by at least a day a floor vote on their package to raise the debt ceiling, the latest challenge facing Speaker John Boehner and GOP leaders as they try to avoid a default on the nation’s debt.

The decision to move the vote to Thursday or beyond came after the Congressional Budget Office reported late Tuesday night that the package Boehner crafted would only reduce deficits by $850 billion, $150 billion short of the speaker’s goal of $ 1 trillion in budget and spending cuts.

House Republican leadership aides were looking for ways to revise the bill to address the shortfall. This could include either lowering the borrowing authority Congress approves, or recommending additional spending cuts. GOP aides said the first option is more likely. The United States is projected to default on its debt Aug. 2, according to the Treasury Department.

Boehner was hauling members who are undecided or leaning “no” into his Capitol suite for one-on-one meetings, using the time-honored tradition of his office to twist arms and win votes. Boehner had “made progress,” but the CBO scores threw all that progress into doubt.

House GOP leaders are betting that if they get the bill in front of Obama within a week of a possible U.S. default on its $14.3 trillion debt, the president will have no choice but to sign it, despite a veto threat issued Tuesday afternoon by the White House.

No official whip counts are available, although some Republican lawmakers estimate 40 to 50 GOP lawmakers are no’s or undecided heading into the dramatic floor fight. Boehner is unlikely to bring such an enormously important proposal to the floor without being completely solid on his whip count, preferring not to roll the dice on this issue. And on Tuesday night, that determination was made.