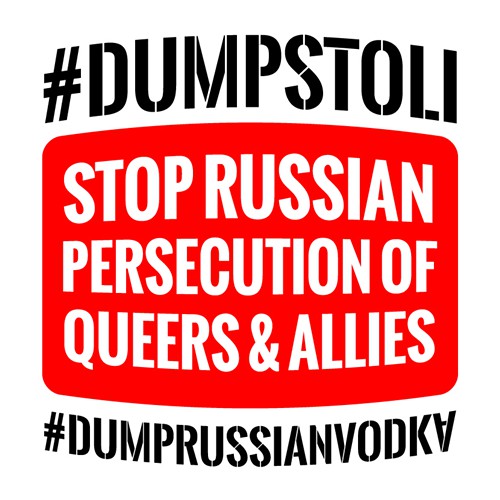 In his blog at The Stranger, Dan Savage urges gays and straight people to stop drinking Russian vodka as a form of boycott against the recent anti-gay laws and treatment of the LGBT community:

“If you drink a Russian Vodka like Stoli, Russian Standard, or any of the other brands listed above, switch to another brand from another country, or even a local brand from a local distillery. Stoli is the iconic Russian Vodka and it’s returning to Russian ownership in 2014. Other brands like Russian Standard should also be boycotted. Do not drink Russian vodka. Do not buy Russian vodka. Ask your bartender at your favorite bar—gay or otherwise—to DUMP STOLI and DUMP RUSSIAN VODKA.”

As to why Savage prefers supports boycotting vodka over the Winter Olympics, he points to an inspired quote from Patrick Burke, founder of the You Can Play project, on the subject:

“In 1968, Kareem Abdul-Jabbar refused to play in the Olympics as a protest against the treatment of blacks in America. The same year, Tommie Smith and John Carlos stood on a medal stand, gloved fists in the air, as a protest against the treatment of blacks in America. History remembers the athletes who showed up…. To send the strongest possible message of support to the LGBT community, we must send our athletes—those who are LGBT, those who are LGBT-supportive, those with LGBT family members or friends. Let them show that champions stand strong with their teammates and training partners. Send our openly LGBT and “publicly pro-gay” athletes and let them compete. Let them win. Show the world that there are elite LGBT athletes who are not afraid to be themselves, on and off the playing field. That the majority of the world’s finest athletes support their LGBT teammates, coaches, and opponents by treating them as equals in competition.”

Chicago’s biggest gay bar announced tonight that they are no longer selling Stoli or any other Russian products. From the Windy City Times:

Sidetrack today said that it would be removing Stolichnaya Vodka and other Russian products from their shelves. The decision comes in the wake of Russia’s implementation of oppressive anti-gay laws last month.

“I had been following the various news reports about what was going on in Russia,” said co-owner Art Johnston. “It’s hard to believe that they could carry out and enforce that kind of a law, but they did.” He added that there was no way he could in good conscience continue to serve Stolichnaya or any other Russian products at the nightclub.

It is unsafe for gay people to travel in Russia: this week four gay Dutch tourists were arrested for spreading “gay propaganda” in Russia.