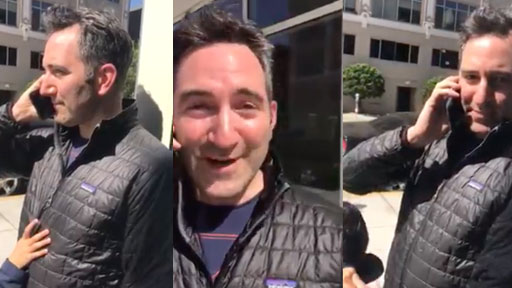 Wesly Michel was waiting for a friend at their apartment building in San Francisco on July 4, when he encountered a racist assh*le who decided he needed to call the police because Michel was, basically, ‘waiting while black.’

Sadly, the son of the racist was with him at the time, and the son begged his father not to call the police or act out.

“Daddy, look what you’ve gotten us into. Let’s go!”

Michel, a 35-year-old software engineer, told CNN, “Unfortunately this incident mirrors the experience that African Americans endure daily where we are questioned on whether we belong. I videotaped this incident to protect myself and to support my story should police get involved.”

During the three-and-a-half-minute recording (which was posted to Michel’s Facebook page), the boy can be heard pleading with his father not to call police on Michel, whom the father says is a “trespasser” in his building that he describes as “appears to be African-American.”

Michel encountered the father and son on Independence Day as he says he was waiting on a friend at an apartment building in San Francisco. The video begins as the man asks Michel to identify the person he is there to see and to “please call your friend on the call box and have them come down and get you.”

“They don’t have to do that. You can just walk away,” Michel responds.

The man, who appears to be holding open the door to the building during the conversation, tells Michel he’s going to call the police.

“Daddy don’t!” the child says as the man pulls out his cell phone.

Michel welcomes the call and reminds the man that he is being recorded.

“You’re just gonna be the next person on TV, just remember that and you have your son with you,” Michel tells the man.

The man calls the police and tells them that Michel is a “trespasser,” who “tailgated” into the building, walking in as he was walking out.

As the man talks to police, his son begins pleading with him to leave and to not call police.

The boy begins to cry as his father describes Michel to police.

Of course, Michel’s friend arrives (as the video is still recording) but there’s no apology from assh*le man.

As the father smirks, his young son continues to beg his father. “Told you. Let’s go now,” pleads the young boy. “Daddy, look what you’ve gotten us into. Let’s go!”

The police do not come to the scene. Assh*le man asks Michel to stop recording, but he continues anyway.

My question is: if you truly think the man is trespassing and a danger, why are you continuing to stand within two feet of him with your VERY young son next to you???

Reading the comments on Michel’s Facebook page, the vast majority note that the son had the good sense that the father did not. Many also pointed out how traumatized the child was, but assh*le man wouldn’t relent even for his child.

Internet sleuths, including the folks at Essence, believe the man to be someone named Christopher Cukor. Several posters found his Linkedin profile as well as his Facebook page before the profile photo was changed.

Ol’ Chris tried to delete info from his linkdin, facebook and other accounts, but we got them screen shots tho. pic.twitter.com/H7UdgTYxlu

The photos of the man do appear to be him, but I’m not out to dox anyone.

There is an interesting twist to the story.

IF the man is someone named Christopher Cukor, several people found an SF Gate news item from 2012 of a man named Peter Cukor, in the same area, who was killed by a black man after calling the police about a “strange man” on his property.

Peter Cukor had a son named Christopher Cukor, who would be about 44-years-old today.

That Christopher Cukor blamed the police for not responding to his father’s call and eventually sued the police department. It appears from the police transcript of the call that the elder didn’t communicate imminent danger. But when the black man returned, Cukor’s wife called saying her husband was being attacked, and the police responded.

According to the SF Gate report, the suspect was found mentally incompetent to stand trial. He mentioned to police he was looking for his fiancée Zoey. The man’s father told police his son didn’t have a fiancée and Zoey was a figment of his imagination.

The attacker’s family told authorities he had been diagnosed with paranoid schizophrenia five years earlier and they had asked authorities to remove him from the streets while he was treated, reports SF Gate.

That is a sad story. But, I don’t believe that justifies living the rest of your life assuming all black men pose violent danger to you.