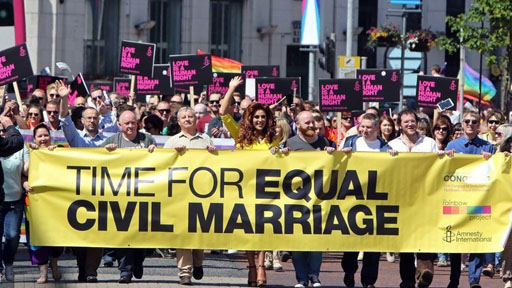 Several major corporations have signed on to a letter urging the UK Parliament in London to introduce legislation that would legalize same-sex marriage in Northern Ireland.

Marriage equality has been the law of the land in England, Scotland and Wales since 2014, and the Republic of Ireland voted for marriage equality via public referendum in 2015.

That leaves Northern Ireland as the only part of Western Europe to not allow LGBT couples to marry. The only legal recognition available for same-sex couples are civil unions thanks to UK-wide legislation passed in 2005.

According to Gay Star News, the Northern Ireland government has been practically non-functional for almost 600 days since rival parties stopped working together.

The argument for marriage equality isn’t just based on rights and equality, says John O’Doherty, Director of The Rainbow Project and member of the Love Equality consortium.

According to O’Doherty, “There is also an important economic argument for legalizing same-sex marriage.”

“Equality, diversity and inclusion contribute to a happy and productive workforce and can help in attracting global talent to Northern Ireland,” says O’Doherty. “However, without full legal recognition of same-sex marriages retaining and attracting talent can be difficult.”

“As one of the world’s most inclusive brands, Coca-Cola celebrates diversity, inclusion and equality,” says Sandru. “At Coca-Cola, we know that creating an environment where everyone can reach their full potential, regardless of gender age, sexual orientation, ethnicity, religion, ability or socio-economic background, is key to driving businesses forward.”

Corporate support has been shown to be a powerful component in the fight for equal rights.

In 2015, hundreds of major companies signed on to an amicus brief in support of marriage equality as the U.S. Supreme Court weighed the issue.

And in Australia, Coca-Cola, Quantas Airlines and more voiced their support for same-sex marriage as the country readied to vote in a mail-in referendum which eventually led to marriage equality becoming legal ‘down under’ in January of this year.

Everyone deserves love, and every couple should have the right to happiness. That’s why we say YES #marriageequality #cokesign #kingscross pic.twitter.com/8ChTRgTuL0