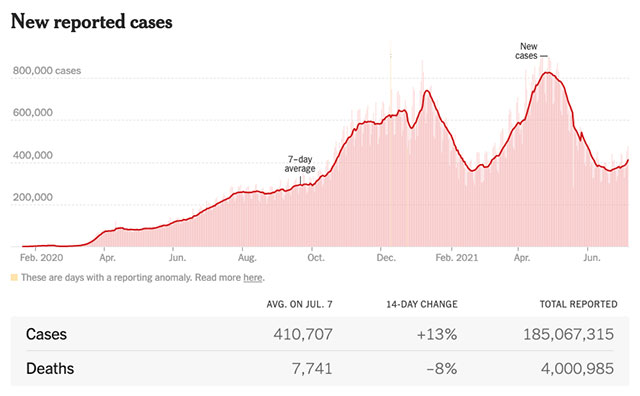 The coronavirus death toll has now surpassed over 4 million world wide even as the more contagious Delta variant continues to spread.

The world’s known coronavirus death toll passed four million on Thursday, a loss roughly equivalent to the population of Los Angeles, according to the Center for Systems Science and Engineering at Johns Hopkins University.

It took nine months for the virus to claim one million lives, and the pace has quickened since then. The second million were lost in three and a half months, the third in three months, and the fourth in about two and a half months. The number of daily reported deaths has declined recently.

Those are officially reported figures, which are widely believed to undercount pandemic-related deaths.

As the Delta variant continues to spread, vaccinations in the U.S. are seeing a clear decline. Health officials say 99% of the recent coronavirus death toll involves unvaccinated people.