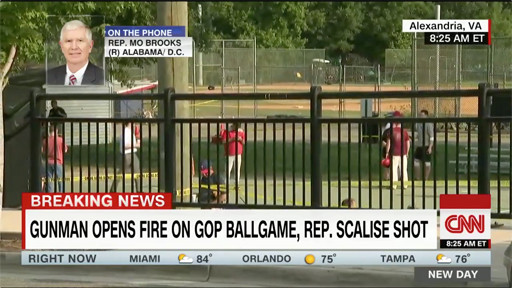 Rep. Steve Scalise, a congressional staffer and members of the congressional police force were shot Wednesday morning in Alexandria, Virginia, in what sources are calling an apparent “deliberate attack.”

Scalise, the third ranking member of House Republican leadership as the majority whip, appeared to have been shot in the hip and it appeared two Capitol Hill police agents were shot, Rep. Mo Brooks told CNN. A congressional staffer was also injured. Matt Mika, a lobbyist for Tyson Foods who sometimes practices with the team, was also identified as one of the victims, and Sen. Jeff Flake said Mika was the most seriously injured.

As of 9:45 a.m. ET, Scalise was in stable condition but undergoing surgery, according to a statement from his office.

The shooting took place at a practice for the GOP congressional baseball team. According to both congressional and law enforcement sources, the shooting appears to be a “deliberate attack.”

According to Rep. Eric Swalwell, the charity baseball game will continue as scheduled.

The #congressionalbaseballgame is on. We will play for charity, but also for the victims & the heroic officers who took down the shooter.

For those who may not know, the game has been played annually since 1909. The event benefits the Washington Boys And Girls Club and other DC charities. Last year the game raised over $500,000.

To date, Republican and Democrats are tied with 39 wins each.

Watch the report below:

Rep. Scalise and Capitol Police officers are expected to be OK; their injuries are not considered life-threateninghttps://t.co/fpJe2i1GRQ

Horrified by shooting in Alexandria. My thoughts are with @SteveScalise, my colleagues, staff members, and police who were attacked this AM.

My thoughts and prayers with @SteveScalise, Capitol Police and staff at the shooting in Alexandria, VA this morning.

Praying for Steve Scalise and all hurt in the outrageous attack this morning in Alexandria.