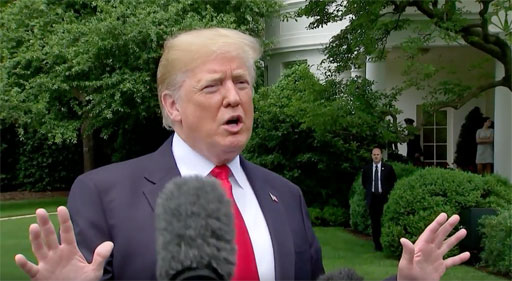 Donald Trump really, really wants his nickname “SpyGate” to take off so, so badly.

Asked if he had any proof regarding his allegations the FBI embedded a spy in his 2016 campaign, the Trumpster repeated his pet phrase: “We now call it Spygate. You are calling it Spygate.”

Trump’s claim is that the FBI put a “spy” in his campaign at the behest of Barack Obama’s White House as part of an effort to undercut his candidacy by alleging collusion with the Russians. It’s hard to square that claim with 1) Trump’s repeated insistence that the Russia investigation began only after he won as an excuse for the Democrats’ loss, and 2) the fact that America only learned about the investigation into Russian collusion after voting had already occurred.

If Obama and the Democrats put a spy in his campaign to undercut his chances, they made a small strategic error by not mentioning anything publicly before votes were cast. But that’s the claim, because internal consistency is not a requirement for any conspiracy theory, much less this one.

In a contrast to his early morning Tweetstorm, he backtracked a bit when asked if he has any proof of the allegations saying, “I hope it’s not true, but it looks like it is.”

“A lot of bad things have happened,” Trump told reporters. “I want them all to get together. They will sit in a room. Hopefully they will be able to work it out among themselves.”

By the way, if you’d like a detailed explanation about the difference between a “spy” in Trump’s campaign and the FBI investigating Russian interference, check out this Twitter thread.

And yes, we all remember what happens when you try to make up your own catch phrase: