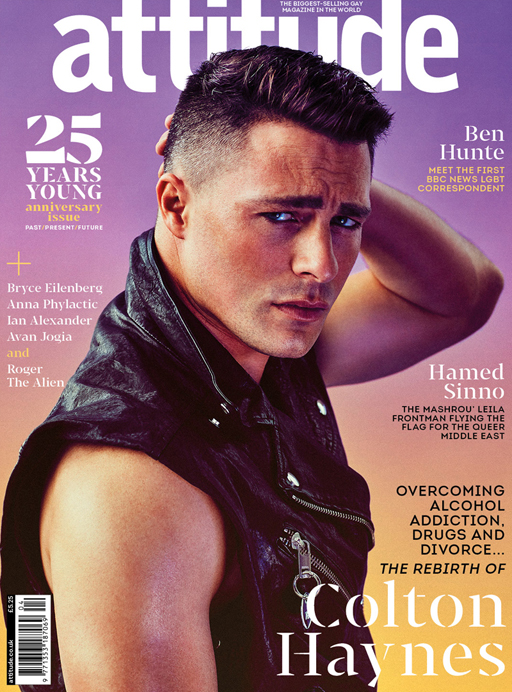 In startlingly candid detail, actor Colton Haynes shares how his struggles with drug and alcohol addiction, paralyzing anxiety, the death of his mother and the end of his marriage led him to some very dark places.

In the cover story for Attitude Magazine’s 25th Anniversary issue, the Teen Wolf/Arrow star opens up about his dangerous downward spiral that led him to recovery.

“In 10 years, there were maybe 25 days I didn’t drink,” he tells Attitude. “I remember when I started, it was a couple glasses of wine, and it regressed into really dark times. I used to blame it on my anxiety or depression issues, but really the root of all my problems was the alcohol and drugs.”

Haynes points to his public coming out in 2016 as the catalyst that pushed his personal issues to the edge.

“I came out and, in a way, my downward spiral started,” he admits. “I felt extremely free but at the same time the amount of attention I was getting was making me spin out of control.”

“I got married and that didn’t work out,” Haynes continues. “That was extremely public and heart-breaking, and right when that was going on, my mom died.”

The passing of his mother was apparently the last straw – “My brain broke.”

The American Horror Story alum shares that when he showed up for his first day of work on a ‘massive comedy for a studio,’ he was abruptly fired that day.

“They said I looked as if I had ‘dead in my eyes’, and I did,” Haynes admits. “I got so heavily involved with drugs and alcohol to mask the amount of pain I was feeling that I couldn’t even make some decisions for myself.”

It was during those dark days that Haynes would experience two seizures, but wouldn’t remember them until he found sobriety.

But that would be a rocky road to travel. The journey to recovery included multiple hospital admissions for alcohol and drug abuse.

It wasn’t until after a 7-day bender in a Los Angeles hotel room that he was committed via a 5150 psychiatric hold for three days. When he was found in the hotel room, he admits to having major bruises all over his body, loss of partial sight in his left eye, and serious kidney issues.

Haynes saw the incident as a “rude awakening” as he hit rock bottom.

“I was ready to stop running from my own problems,” said Haynes.

He entered a four-month treatment program, and says he has been sober for six months now.

“Once I went to treatment, I found this amazing amount of true love for myself, and started figuring out who I am without those vices, and recognizing the people in my life who lifted me up instead of tearing me down.”

Like many who struggle with addiction, Haynes now realizes he’s “always going to be in recovery.”

The TV super hero is sharing his story now because, “There are so many people struggling out there, but not a lot of them talk about it.”

With sobriety comes clarity, and with clarity comes a new perspective.

“Life is much more beautiful than I could have imagined,” he says. “It’s just a different life now. It’s the best gift I’ve ever been given.”

Check out Haynes’s full cover story/interview in the May 2019 issue of Attitude Magazine.

The hunky actor also shared some of the Leigh Keily photo shoot for Attitude with his 6.6 million Instagram followers.

View this post on Instagram
Extremely humbled to be on the 25th Anniversary cover of @attitudemag . Have to admit I was really nervous to open up about my struggles in the past. I hope those who are also struggling know that they aren’t alone & there’s nothing wrong with seeking help.❤️
A post shared by Colton Haynes (@coltonlhaynes) on Mar 28, 2019 at 10:26am PDT