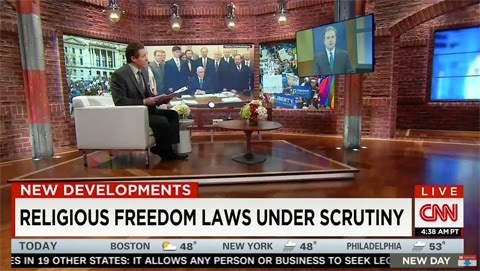 CNN’s Chris Cuomo does not suffer fools lightly. And he proved that once again this morning.

If you come on his show, you better know your stuff. Clearly, Ryan McCann was not prepared to be confronted with facts.

McCann argued that the bill only ensures protections for religious minorities, something Cuomo said was belied by the presence of anti-LGBT figures at the bill’s signing. McCann said that the statements Cuomo was alluding to had been passed around the internet “by the left.”

Things got personal when Cuomo demanded McCann account for the real motives behind the bill, which was supported by “groups like yours, that are Christian-based, with an animus toward the LGBT community. Own who and what you are. There’s nothing wrong with that you’re allowed to believe it but you’re not about native americans or people who want liver transplants, right?”