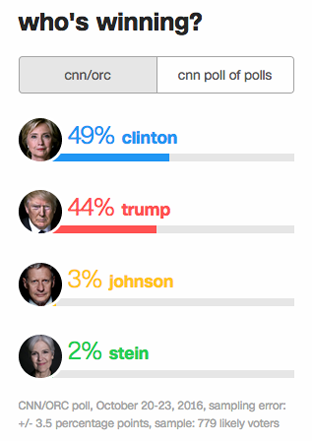 The latest CNN/ORC poll shows Democrat Hillary Clinton holding a solid 5 point lead ahead of Republican Donald Trump. When the third party candidates are factored out, Clinton leads by 6 points.

Clinton now stands at 53% among voters under age 45, compared with 47% in the previous CNN/ORC poll. In fact, the only age group where Clinton currently trails Trump is among those age 50-64, who back Trump by 4 points in this poll.

Clinton’s support has also ticked up a few points among non-whites (72% back her now vs. 69% in a poll conducted just after the first debate, not a large enough change to be significant, but edges her margin over Trump among this group above 50 points).

Trump has gained a bit among white voters, edging up to 54% in the new poll from 49% support in the last poll. That gain is centered largely among white non-college voters, who break for Trump by a 62% to 32% margin, while white college grads continue to lean in Clinton’s direction, favoring the former secretary of state by 11 points.

The gender gap remains large, with Clinton holding a wide 12-point lead among women, topping Trump 53% to 41% among that group, while Trump edges Clinton by a narrow 3-points among men, 48% to 45%.

CNN’s “Poll of Polls” – which averages the results of several major national polls – shows Clinton with a 9 point lead. 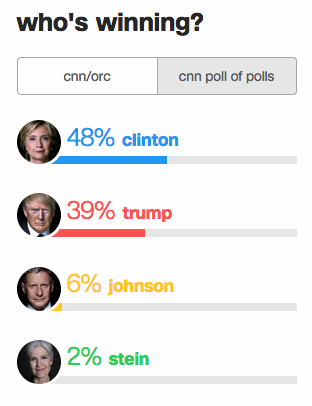