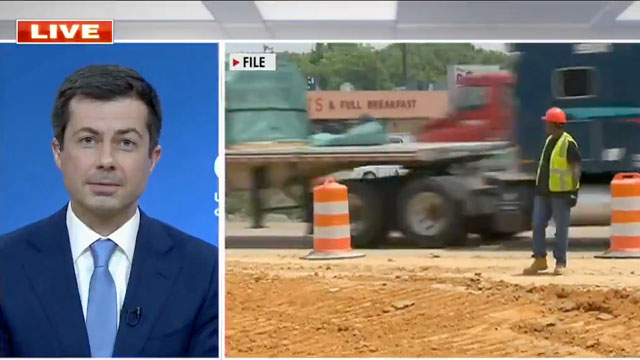 Fox News anchor Bill Hemmer noted that in running through some numbers about the bill he found “5.6 percent of the $2 trillion proposal is only dedicate to roads and bridges. Why is that?”

Buttigieg then calmly and politely explained to Hemmer that “infrastructure” isn’t merely “roads and bridges.”

“We saw U.S. citizens, living in Texas, melting snow in their bathtubs to be able to flush their toilets,” continued Buttigieg. “In the United States of America that is unacceptable. So yes, infrastructure includes energy infrastructure.”

As the country is now well-aware, Texas learned the hard way in February about how ignoring the state of energy infrastructure can come back to bite folks in the butt.

Buttigieg added that in Biden’s proposal, infrastructure also includes broadband internet which is woefully absent in many rural areas.

“Good infrastructure planning is always about looking to the future,” said the transportation secretary. “You know, railroads were not a part of infrastructure until we built them. And I’m sure in the Eisenhower era they weren’t thinking about things like broadband, they were still working on electrification which would have sounded newfangled in its time. Now it’s time to prepare for the future.”

Buttigieg has made a name for himself being able to handle himself over at Fox News and he demonstrated that skill again today.

“What’s abundantly clear is that this policy we’ve had in the past of short changing our infrastructure.. that’s catching up to us.” @PeteButtigieg @SecretaryPete discusses President Biden’s $2 Trillion spending bill unveiled on Wednesday @DanaPerino @BillHemmer pic.twitter.com/Bfio9teZ6I