Christine McVie, singer/songwriter for Fleetwood Mac – one of the most popular rock bands of the 70s and 80s – has died at the age of 79.

“On behalf of Christine McVie’s family, it is with a heavy heart we are informing you of Christine’s death,” read the announcement posted on the singer’s official Facebook page.

“She passed away peacefully at hospital this morning, Wednesday, November 30th 2022, following a short illness. She was in the company of her family.” 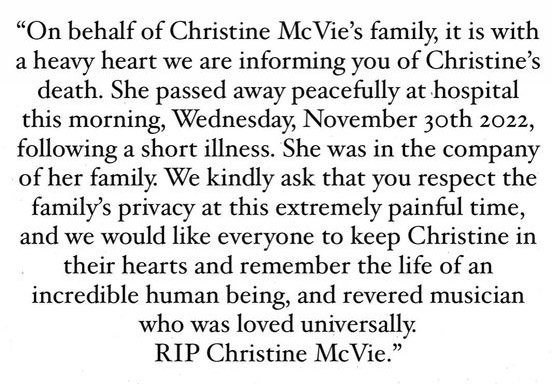 No cause of death was given. But in an interview with Rolling Stone this past June, McVie shared that she was in “quite bad health” and suffered from painful issues with her back.

Ms. McVie’s commercial potency, which hit a high point in the 1970s and ’80s, was on full display on Fleetwood Mac’s “Greatest Hits” anthology, released in 1988, which sold eight million copies: She either wrote or co-wrote half of its 16 tracks.

Her tally doubled that of the next most prolific member of the band’s trio of singer-songwriters, Stevie Nicks. (The third, Lindsay Buckingham, scored three major Billboard chart-makers on that collection.)

The most popular songs Ms. McVie crafted favored bouncing beats and lively melodies, including “Say You Love Me” (which grazed Billboard’s Top 10), “You Make Lovin’ Fun” (which just broke it), “Hold Me” (No. 4) and “Don’t Stop” (her top smash, which crested at No. 3).

But she could also connect with elegant ballads, like “Over My Head” (No. 20) and “Little Lies” (which cracked the publication’s Top Five in 1987).

McVie’s death comes just months after another pop/rock music icon of the same period, Olivia Newton-John, passed at the age of 73.

Christine McVie of Fleetwood Mac is dead at 79. The singer-songwriter was a hitmaker for one of music’s most popular bands. https://t.co/uoeCx5vNiZ pic.twitter.com/dlUaD6r5d2

Fleetwood Mac shared a statement about the passing of their bandmate, Christine McVie https://t.co/VUfxHdJFr6 pic.twitter.com/9qH1k4IjHk