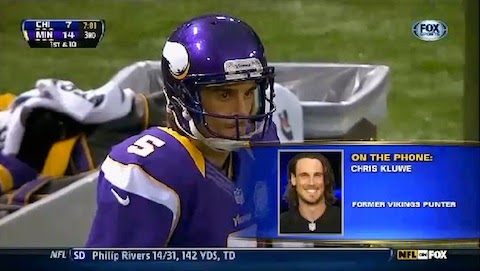 Late Friday evening, the Minnesota Vikings released a summary of their months long investigation into allegations of homophobic comments made by special teams coach Mike Priefer.

Kluwe was somewhat vindicated as the report showed another team mate acknowledged hearing Priefer making one of the homophobic comments.  A comment Priefer vehemently denied a few months ago.

Priefer was suspended for 3 games and ordered to make a donation to LGBT organizations.

Kluwe spoke a reporter at KMSP about the results of the investigation and what steps he intends to take next:

“Players who get caught smoking weed or DUI get 4 games, and you’re telling me the guy who made a comment like ‘let’s round up all the gays put them on an island nuke it till it glows’ — he’s only going to get a slap on the wrist? … I think he’s probably sorry that all of this ever happened. I don’t think he’s truly sorry because in the report he kind of backs his way and says yeah, I kind of said it…The NFL is a league where you can get redemption for killing someone, for beating your wife in an elevator, for driving drunk, for a whole variety of things but when you speak out for civil rights, that’s the one thing you cannot get redeemed for.”

Kluwe has announced plans to file a lawsuit against the Vikings, and his legal team is still requesting a copy of the full 150-page investigation.