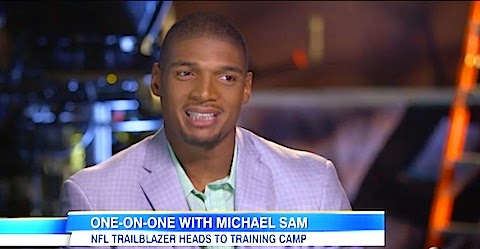 My man Michael Sam may have been drafted at number 249, but he recently signed a four year contract with the St. Louis Rams.

And he’s making a strong showing in jersey sales, currently ranked at number 6 since this year’s draft:

In fact, so many people bought Sam’s jersey that he actually cracked the top 10 in jersey sales since the NFL draft according to Darren Rovell of ESPN. Even more impressive is the fact that Sam is one of only two defensive players to have jersey sales in the top 10. The other defensive player is none other than NFL superstar Richard Sherman.

Michael recently sat down with Robin Roberts to talk about doubts he may have had just before he got the historic call from the St. Louis Rams; and the emotion behind his acceptance speech for this year’s Arthur Ashe Courage award at the ESPY Awards: