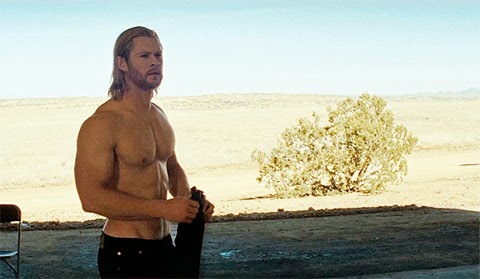 It turns out that Chris Hemsworth, the very Thunder God himself, has a shirtless scene near the beginning of the upcoming “Thor: The Dark World.” Why?

The better question: why not?

Though it could have been confused as pure fangirl service, the scene was actually the brainchild of Marvel consigliere Joss Whedon, who thought the movie was missing a little something special.

“That [scene] kind of came from Joss actually. He just said that there needed to be something romantic in there,” Hemsworth said. “Then he said, ‘Chris, get your shirt off.’ I said, ‘Well, I don’t know. What’s the why? What are we doing?’ The justification was that it was him coming home from battle, washing blood off his hands. It is what it is. How to weigh into that without sounding like an idiot?”

“Thor: The Dark World” sees its release on November 8th.