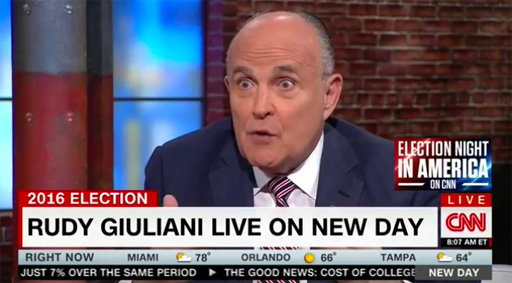 Rudy Giuliani is like a pig in shit as he conflates and obfuscates any and all possible conspiracy theories concerning Hillary Clinton in this interview with CNN’s Chris Cuomo.

He’s clearly living for all the attention he’s getting as a Trump surrogate.

“I mean Rudy! I have looked up to you my entire life because you’re so accurate,” said Cuomo as the exchange got heated. “And all of a sudden you’re in Trumpland, and the facts are all over the place.” As Giuliani dug deeper into the rabbit hole to make his case, Cuomo asserted, “You’re not even close to connecting anything yet. You’re not close.”

Giuliani pivoted at one point to slam Cuomo and, presumably, CNN for their treatment of the GOP nominee, saying “You guys are so darn unfair to Trump!” Cuomo appeared incredulous with just how loose and fast Giuliani has become when it comes to the facts of a case.