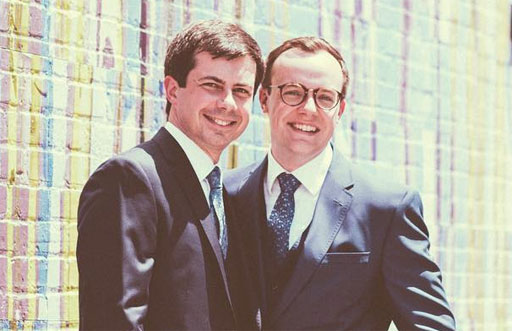 Ever since his husband, Mayor Pete Buttigieg of South Bend, Indiana, announced his candidacy for president, Chasten Buttigieg has been charming many political followers either in person, on the campaign trail, or on social media.

But, in a new profile by the Washington Post on the man who hopes to become the nation’s first ‘First Gentleman,’ Chasten shares some of the challenges he’s faced in his 29 years.

Chasten has grabbed people’s attention not just because he’s the spouse of the first Democratic gay White House hopeful, although that does factor in. But he’s also a millennial married to a millennial. And, he and Mayor Pete have only been married less than a year.

According to the Washington Post profile, he grew up in a typical conservative Midwestern family. His parents, Sherri and Terry Glezman, worked hard to make ends meet while raising Chasten and his two older brothers, Rhyan and Dustin.

But, while his brothers liked to play sports and go hunting, Chasten admits he was happier “reading Harry Potter or singing Celine Dion” at the top of his lungs while helping his mother with housework.

By the time he got to high school, he realized there was something ‘different’ about him.

Although he didn’t come out at the time – he admits there were no openly gay students at his school – he was the target of bullies who called him homophobic slurs and would physically assault him.

So when the opportunity came up for him to spend his senior year of high school abroad in Germany, he took it. “The further away I could get, the safer I felt,” he told the Post.

It was during that year he began to confide his ‘secret’ to others in the exchange program. And by the time he returned to his home town, it was “his truth.”

View this post on Instagram
#tbt to our first Notre Dame game together. Ready for a win on Saturday.
A post shared by Chasten Buttigieg (@chasten.buttigieg) on Sep 8, 2016 at 9:23am PDT

Chasten shares that he opened up to some friends during the summer after graduation, receiving mixed responses.

In recounting the coming out process, he shares that one friend brought up God and implored him to change his mind. “Like it was a choice,” says Chasten. “This thing I had decided to do.”

His family got the news last. He found he couldn’t say the words out loud, so he wrote a letter to his parents and handed it to them in their living room.

“I remember my mom crying,” he recalls. “And the first thing she asked me was if I was sick. I think she meant, like, did I have AIDS?”

Chasten recalls a silence loomed over home life, although he remembers at one point one of his brothers said, “No brother of mine…”

Feeling like an outcast, he decided to leave home.

With his packed bags, he bounced from one friend’s couch to another; sometimes he slept in his car in the parking lot of the community college he was attending.

After some months, though, his mother called and asked him to come home. He says, “I cried, and I went home immediately.”

Over time his parents came to terms with his being gay, and even walked him down the aisle at his wedding last summer.

But, his brothers were another story.

Rhyan Glezman, currently a pastor of a church in Clio, Michigan, told the Postthat Chasten’s coming out wasn’t a surprise, and that he loves his youngest brother. While he wants the best for Chasten, he admits, “I just don’t support the gay lifestyle.”

Chasten would go on to earn a degree from the University of Wisconsin in theater and global studies, eventually working at a youth theater academy in Milwaukee. But even with a full schedule he didn’t have benefits.

So, he got a second job slinging coffee and lattes 20 hours a week at a Starbucks to get health insurance.

The Starbucks gig led to his moving to Chicago. And it was while living in the Windy City that he met Mayor Pete on the dating app Hinge.

A few weeks of FaceTime chats with the young mayor convinced Chasten to make the drive to nearby South Bend, and the rest, as they say, is history.

Chasten says he laughed when Mayor Pete first broached the subject of running for president. But that quickly turned into total support for the idea.

He shares that the campaign trail is trying on many levels. Having lost 20 pounds since the holidays, he finds he’s worn out at the end of most days from what he calls “vulnerability fatigue.”

“You put yourself out there so much,” he admits. “And we’ve invited the world to scrutinize us.”

And while much of the country is interested in the first gay presidential contender with what looks like a decent shot, there are homophobic, nasty letters that arrive at their home.

“It’s just so important to go out there and do a good job right now,” he tells the Post. “Because for the first time in many people’s lives, they see someone on a national scale that makes them say, ‘Oh, that’s me, too.’”