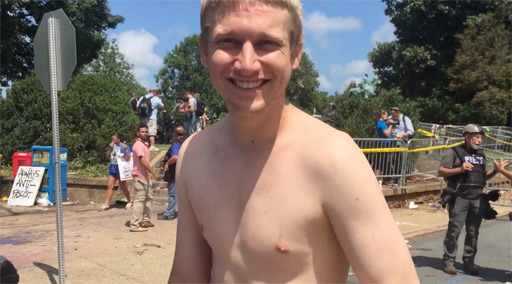 Documentary-maker C.J. Hunt was in Charlottesville this past weekend to finish a doc on Confederate monuments.

Caught up in the violent turmoil of Saturday’s neo-nazi events, he came across a young white supremacist who came running by him, clearly separated from his pack and afraid.

It was Saturday, and the police had finally called for everyone to clear the park. As I filmed officers opening up a blocked street, a young man ran into view, screaming for help. He wore the khaki-and-white uniform of the white nationalist group Vanguard America. He had been separated from them and was being chased by at least one protester. He ripped off his shirt and begged the crowd for mercy. He wasn’t actually into white power, you see.

“Barely,” he clarified to me. As he shoved his polo shirt into a plastic bag, the fear on his face settled into a smirk. “It’s kind of a fun idea,” he explained. “Just being able to say ‘white power,’ you know?”

I didn’t know. But by the look of things, the fun of shouting “white power” stopped as soon as he was threatened with the same violence his group brought to bear on others. Cut off from the pack, forced to face the consequences of his inflammatory behavior, he found escape in a costume change.

Hunt goes on to note that the simple ability to shed his white supremacist skin demonstrates, in part, the white privilege the alt-right denies exists. People of color have no access to such immediate camouflage. The privilege to disappear by removing a shirt.

Watch below as the young neo-nazi explains before he walks off with a smirk.