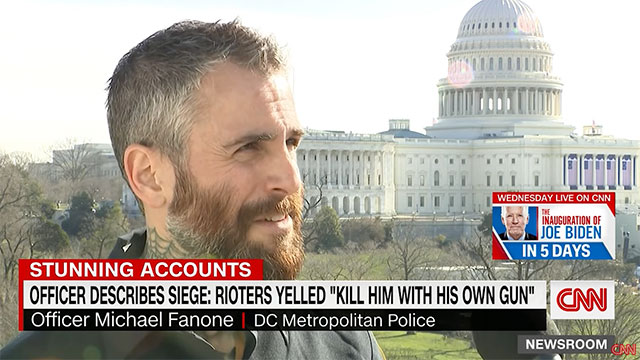 According to CNN, Fanone is a narcotics detective who works in plain clothes. But when he heard the commotion at the Capitol, he grabbed his still brand-new police uniform that had been hanging in his locker and put it on for the first time. He raced to the building with his partner and helped officers who were being pushed back by rioters.

But he was soon overwhelmed by the insurrectionists and tasered several times as he was pulled down the steps of the Capitol building.

“I was just, you know, trying to fight as best I could,” Fanone told CNN. “I remember guys were stripping me of my gear, these rioters pulling my badge off my chest. They ripped my radio off my vest, started pulling ammunition magazines from their holder on my belt.”

“Some guys started getting ahold of my gun and they were screaming out ‘Kill him with his own gun.’ At that point it was, you know, self-preservation – how do I survive this situation?”

“I thought about using deadly force, I thought about shooting people. And then I came to the conclusion that if I was to do that I’d hit a few but I’m not going to take everybody. They’d probably take my gun away from me and that would definitely give them the justification they were looking for to kill me.”

“The only option I came up with was to appeal to somebody’s humanity. I just remember yelling out that I have kids. It seemed to work, some people in the crowd started to encircle me and offer me some kind of protection.”

“A lot of people have asked me my thoughts on the individuals in the crowd that helped me or tried to offer some assistance, and I think kind of the conclusion I’ve come to is like, you know, ‘Thank you, but fuck you for being there.’”

Watch below as Fanone describes the scene in his own words.