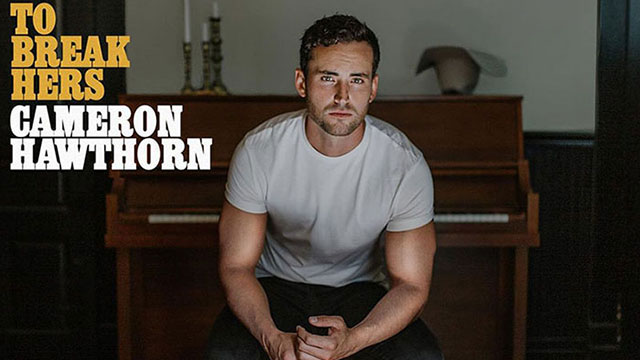 I’m thinking out country singer Cameron Hawthorn’s new single, “To Break Hers” is going to resonate with a lot of gay men.

The song and the music video take a pensive and deeply personal look at the heartache Hawthorn caused not only himself but a girl he dated before coming out.

As many can attest, the closet doesn’t hurt just queer folks but also the early loves who sadly become collateral damage as we work our way to discovering and embracing who we really are.

“Navigating dating is a difficult process in general, and I hate that when it doesn’t work out, someone usually gets hurt,” says Hawthorn about the new song. “For me, there was an added level of why it would never work out with this girl, and it wasn’t until coming out and looking back on the relationship and breakup that I was truly able to process it all.”

Combining influences from his idols like Johnny Cash, Elvis, and Fleetwood Mac, as well as more current artists like Shania Twain and Eric Church, the singer/songwriter delivers robust vocals and pop sensibility.

As an openly gay man myself, “To Break Hers” struck a nerve as I immediately traveled back in my mind to high school and the girl I dated but could never truly commit to. Trust and believe, I really felt this in my bones.

As Hawthorn told The Advocate recently, “When you break someone’s heart, you carry that with you.”

The handsome crooner adds that even while going through the motions of dating, to the point he traveled to the girlfriend’s hometown to meet her family, he knew “deep down that I would never be able to make it work.”

Hawthorn says he “needed to write this song” to help process and move past the guilt and hopes the track can serve as an apology to the girl and himself for the hurt he caused.

The rising country star made a splash last year with his oh-so-romantic single “Dancing in the Living Room” which focused on another intimate aspect of romance queer people sometimes wrestle with: slow dancing.

At the time, Hawthorn told The Advocate, “Being gay, it’s not as easy to dance as a couple in public together as it is for a straight couple. I wanted to express how special that moment is for a couple, when it’s just the two of you in the privacy of your own four walls.”

Hawthorn then showed his versatility (and more dance moves) as he shifted from romantic two-step to a boisterous, barroom dance track, “Oh Hot Damn!”

Look for the rising country star to release an EP later this year. “To Break Hers” is available on all streaming/digital download sites now.

Ranching it up today. How bout you? 🌾