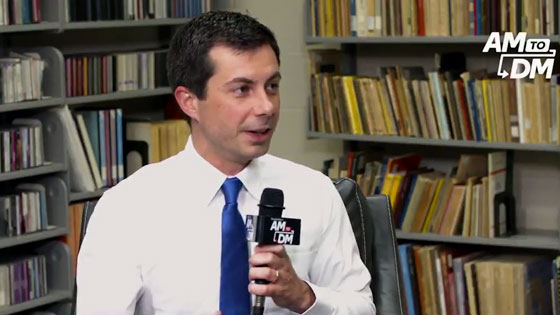 Earlier this week, I reported on a comment by Democratic presidential contender Mayor Pete Buttigieg where he said he ‘can’t even read the LGBT media’ for coverage saying he was ‘too gay, not gay enough…’

I gave the mayor a break assuming he somehow misspoke. The vast majority of coverage by the actual LGBTQ media has been very supportive of Buttigieg and his candidacy.

The articles that HAVE been negative about the mayor centering on his sexuality have been in non-LGBTQ outlets like Slate, The Outline, and the terrible piece by gay author Dale Peck that was yanked offline very quickly.

While all that going on this week, I assumed it would come up at last night’s LGBTQ Forum in Iowa sponsored by GLAAD.

Buttigieg was questioned by The Advocate’s editor in chief Zach Stafford at the event, but he didn’t address the issue.

It turns out Buttigieg was asked that question in an interview for AM2DM by BuzzFeed News which Stafford co-hosts.

Stafford tweeted out his explanation and the video clip today.

“You said in an interview that you ‘can’t even read LGBT media anymore because it’s all he’s too gay, not gay enough, wrong kind of gay’” show co-host Alex Berg said in a clip posted to Twitter today. “And Out Magazine editor-in-chief Phillip Picardi tweeted this question: When LGBTQ+ journalism is dwindling despite our rights being threatened at higher rates, why come for queer media?”

“I appreciate the question and the chance to clear this up,” said Buttigieg. “Just to be clear: LGBTQ media plays an increasingly important role, especially at a time like this.”

“I had a grumpy moment where I was thinking abo, t some of the coverage that I do get frustrated with that seems to tell people how to be gay,” he continued. “And that’s, to be fair, happening in a lot of different sources and places online and it’s one reason why, as a candidate, it’s healthy just not to read too many clips about yourself to begin with.”

He concluded saying, “But I don’t want to take away from the very important work that’s being done in the queer media right now.”

I know some people were wondering why Pete wasn’t asked about queer media comments on stage.

Well, it’s because @itsalexberg did in an exclusive clip on @AM2DM.

Watch out for more interviews like this over the next few days #LGBTQforum https://t.co/7jrKPB0iVu