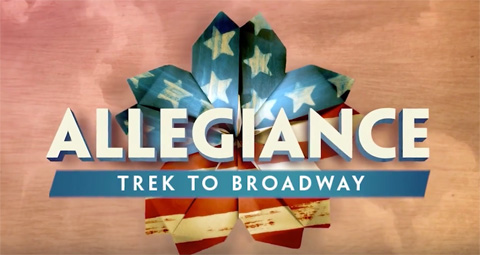 The creators of Allegiance, a new musical based on Star Trek star (and LGBT elder statesman) George Takei’s real life experience as a child in Japanese internment camps during WWII, have launched a 10-part bimonthly online web series following the musical’s journey to opening night.

It’s not quite like “Smash.” Few things are as difficult and complex as taking a show to ‪#‎Broadway‬. It’s a long road–a trek, if you will–paved with uncertainty, risks, and challenges. It’s both thrilling and terrifying.

Since we began this journey, the fans consistently have been our biggest supporters. As a thank you, and with our friends at ‪#‎Facebook‬, we want to give you all a first row seat to an exclusive behind-the-scenes look at what it has taken to make this lifelong dream of mine a reality. Please pass it along to any one you know who has a Broadway dream of their own.

Previews begin October 6th with an official opening on November 8th at the Longacre Theater.

The first episode makes it’s debut today. Check it out below: