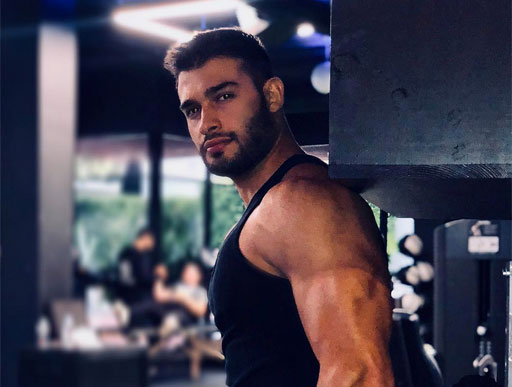 Sam Asghari, Britney Spears’ main squeeze, recently revealed that he wasn’t always the woofy, muscle hound he is today. He also shared how he was able to lose 100 pounds in becoming the fit beast he’s become.

In a recent profile in Men’s Health, the 24-year-old said he began to gain weight after being cut from his college football team. He eventually tipped the scales at an eye-popping 290 pounds.

“I was eating Doritos for breakfast, fast food, sugar, candy, no protein, a lot of carbs, and drinking sugary sodas,”Asghari shared. “My nutrition was extremely horrible. The stress and the fear of not going anywhere [in life] combined gave me my depression.”

I was inspired, I was ambitious, and I wanted a change. I told myself that nothing was going to stop me, and nothing ever did. I was Inspired to work my ass off because my family worked way too hard for me to be here, I would never take any opportunities for granted , and will always will give it all I got. Things happen for you and not to you. Don’t ever point any fingers 💯 #pizzaforlunch#oreosfordinner#doritosforlife
A post shared by Sam Asghari (@samasghari) on Dec 5, 2016 at 12:15pm PST

After six months of seriously bad nutrition and not working out, Asghari committed to making changes in his life.

“I could either continue going through the same thing or I could give it another 100 percent,” he said. “I didn’t want to have to deal with that depression and disappointment anymore. I had to restart.”

Working three jobs was proving to be a deterrent to better health and fitness as well. Asghari quit two jobs and made fitness his primary job.

Along the way, he did swing a bit past center in the obsessive department: measuring his body fat percentage daily and limiting his calorie intake to 1,500.

In only six months, he was 100 pounds lighter, and had reached a stunning 9% body fat.

With all the changes in his health and appearance came high-profile gigs with A-list artists including his appearance in the Fifth Harmony video, “Work.”

It was a pleasure working with @camila_cabello @fifthharmony girls! They’re absolutely amazing. And also got to work with @tydollasign This Music video is going Crazy right now ✊ #Fifthharmony#WorkFromHome#tydollasign @vevo and that bag was very heavy 💪💪💪
A post shared by Sam Asghari (@samasghari) on Feb 26, 2016 at 5:14pm PST

Shortly thereafter he was cast in Britney’s “Slumber Party” video.

Now, Asghari shares his fitness regime with Brit via Instagram.

“The exercises, I come up with them, but the videos are because of my better half. She’s the video director,” he said. “It’s a very fun thing, and I look back at them and smile. Working out together is always nice and we try to do it a couple times. It’s super healthy, mentally and physically. It takes your mind off of everything else.”