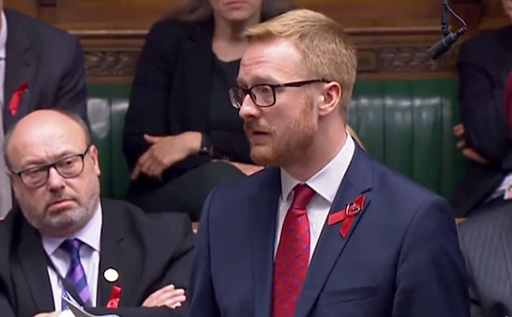 During a debate today in the House of Commons, Labour MP Lloyd Russell-Moyle courageously came out as is HIV positive, making a personal appeal in advance of World AIDS Day to tackle the stigma still associated with HIV/AIDS.

Russell-Moyle becomes the first lawmaker to announce his HIV status in the Commons, and only the second MP to share their HIV+ status with the public.

According to The Guardian, the 32-year-old parliamentarian shared that he was first diagnosed with HIV ten years ago, and thanks to advances in HIV treatments he is able to live entirely unaffected by HIV.

“I wanted to be able to stand here in this place and say to those who are living with HIV that their status does not define them,” Russell-Moyle, the MP for Brighton Kemptown since 2017, said in a speech that drew tributes from many other MPs.

“We can be whoever we want to be, and to those who have not been tested, maybe because of fear, I say to you: it is better to live in knowledge than to die in fear.”

As he finished his speech, his fellow Labour members stood to applaud him even though applause is normally prohibited in the chamber. However, as you can see in the video below, the half dozen Tories in the chamber sat silent.

With the world observing the 30th anniversary of World AIDS Day on Saturday, Russell-Moyle said the day “gives us pause to reflect how far we have come, and to remember those we have lost.”

“But such events are also deeply personal to me. Next year I will be marking an anniversary of my own – 10 years since I became HIV positive,” he continued. “It has been a long journey, from the fear of acceptance and today, hopefully, advocacy, knowing that my treatment keeps me healthy and protects any partner that I may have.”

“I have a perfectly healthy life,” he added. “So my announcement here today should go totally unnoticed.”

I know how much todays reaction would have meant to 22 year old me. Thank you.

Former Labour minister Chris Smith, elected to the Commons in 1983 and the first openly gay MP, announced he was HIV+ shortly before leaving Parliament in 2005.

Today @Lloyd_rm made history by being the first MP to speak in the House of Commons about being HIV positive. His bravery and hope will help to raise awareness and tackle stigma, and inspire people across our country and around the world. https://t.co/ODZUvYjfWT

I pay tribute to the dignity showed by friend Lloyd Russell-Moyle in sharing his experience being diagnosed as HIV+ to the House of Commons today. I stand with Lloyd and all those around the world with HIV to end the stigma & ensure access to effective treatment. Solidarity.

People living with #HIV can do ANY job they choose, including being an MP. Thank you @lloyd_rm for telling the world that you live with HIV. This will combat the considerable #HIVStigma that still exists. It is crucial that it is challenged! https://t.co/8u2UWuaKvE