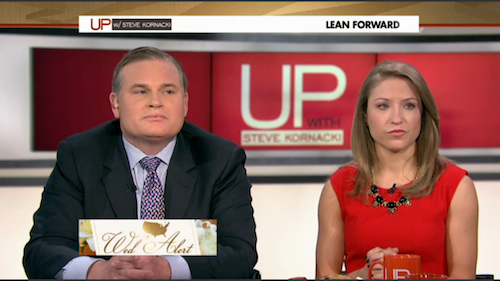 Brian Brown, of the hate group National Organization for Marriage, becomes almost belligerent when he jumps in to defend anti-gay marriage law on UP with Steve Kornacki this weekend.

After the rest of the panel speak calmly and cite current poll numbers, note Brian’s clear shift in energy as he tries to beat back the facts he’s been presented with. Also, his use of poll tested “catch phrases” like “redefine traditional marriage” instead of same-sex marriage or gay marriage. How many buzz words can you count here?

The rest of the panel do a great job of presenting the facts as they are regarding the forward trend of marriage equality.

It was interesting to see Brian in such unfamiliar territory. I’m betting we won’t see him again on MSNBC any time soon. BUT I think this is important to watch because his tone and demeanor are very telling in how he addresses the issue.

On a side note – and I’m not being snarky here – but I can’t help but note how bloated and heavy Brian Brown seems compared to the rest of the panel.  And note his physicality – shoulders hunched up, downward tilt of his mouth…  I’m not calling him “fat” – but he appears unhealthy. When you couple his angst and belligerence with his weight and fitness, I wonder if having such negative messaging to deliver is a factor?