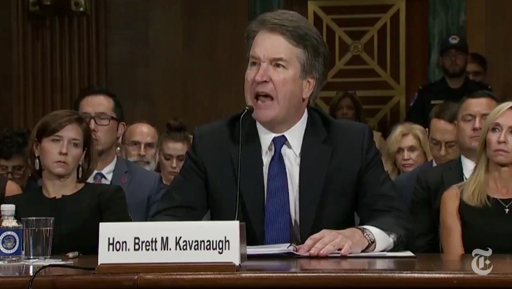 From The Wall Street Journal:

My hearing testimony was forceful and passionate. That is because I forcefully and passionately denied the allegation against me.

At times, my testimony—both in my opening statement and in response to questions—reflected my overwhelming frustration at being wrongly accused, without corroboration, of horrible conduct completely contrary to my record and character. My statement and answers also reflected my deep distress at the unfairness of how this allegation has been handled.

I was very emotional last Thursday, more so than I have ever been. I might have been too emotional at times. I know that my tone was sharp, and I said a few things I should not have said.

I hope everyone can understand that I was there as a son, husband and dad. I testified with five people foremost in my mind: my mom, my dad, my wife, and most of all my daughters.

It’s notable that Kavanaugh chose two Murdoch-owned media outlets to make his case: Fox News for his TV interview and Wall Street Journal for his op-ed.

Judge Kavanaugh’s stunning decision to pen an op-ed bluntly confirms he has neither the judgment nor the temperament to be on our highest court. He can’t erase blaming credible sexual assault allegations ‘on the Clintons,’ attacks on senators, and vows of revenge with an op-ed.

Sen. Richard Blumenthal on Brett Kavanaugh’s op-ed defending his emotions during his testimony: “This op-ed in no way removes the issue of temperament…that testimony was written, carefully prepared, planned, premeditated not some emotional outburst” https://t.co/9pY1NpVpgv pic.twitter.com/2U52lYBM5K