Throwing it back to 1977 for today’s Christmas music selection: Bing Crosby & David Bowie sing “Little Drummer Boy” (written in 1941) and “Peace on Earth,” a counterpoint written especially for the duet.

According to Rolling Stone, Bowie was told about the idea to sing “Little Drummer Boy” as a duet, and the rocker demurred saying, “I won’t sing that song, I hate that song.”

And so,  the counterpoint melody was written to assuage Bowie.

Recorded on September 11, 1977, the song was set up by dialogue between the unlikely pair about how they celebrate Christmas before singing the duet.

Crosby passed away just over a month later on October 14. The TV special aired on November 30, 1977, on CBS. 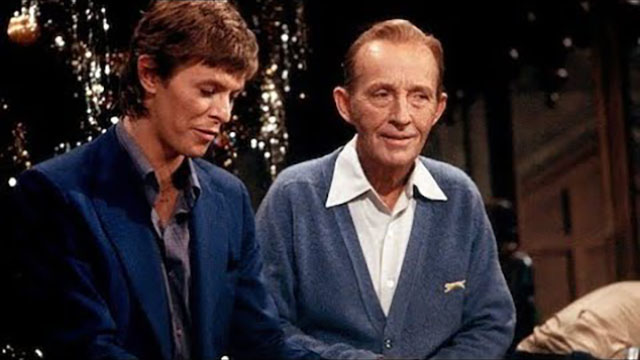 At the time, I think many were surprised by the pairing of  Bing Crosby & David Bowie, and even more so by the musical magic.

After the 1977 holiday broadcast, “Peace on Earth/Little Drummer Boy” went unavailable for many years. It was eventually released as a single by RCA Records in November 1982 and was a commercial success, peaking at number three on the UK Singles Chart.

It became one of the best-selling singles of Bowie’s career, with total estimated sales over 400,000 in the UK alone. The song has since become a Christmas classic in the United States, Canada and United Kingdom.

The Washington Post has referred to the recording as “one of the most successful duets in Christmas music history”.

And if you’re in the mood for more holiday cheer, click here to find more Christmas music from The Randy Report.