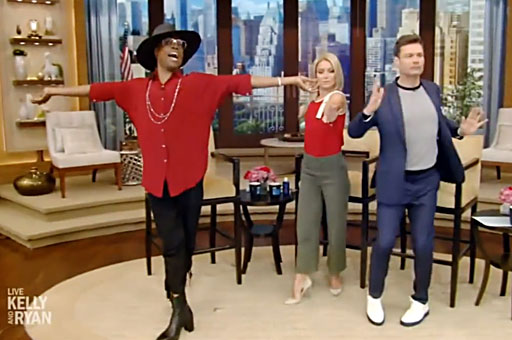 Billy Porter, Tony Award winner (Kinky Boots) and star of the new FX series Pose, recently dropped by Live with Kelly & Ryan to dish on the new series and how he ‘found’ show business.

It all has to do with The Wiz, Dreamgirls and thirsting for Jordache jeans.

Billy shares that theater first came into his life when his grandmother took him to see a national touring company of the Broadway musical, The Wiz, on his birthday in Pittsburgh, PA.

That revelation led to a job performing at a theme park the summer he turned 15 years-old. It was a grueling schedule of six shows a day, but Porter had his eyes on a prize.

“I stayed in a motel, I was fifteen, my mom had to give me permission to work cause I needed my Jordache jeans,” says the future Broadway star. “Oh, she said ‘You got champagne taste on a beer budget – you gonna have to find a job!’”

It wasn’t all glamour though.

“I had to wash out my costumes in the bathtub and hang them to drip dry for the next day,” shared Porter. “But what it did was it taught me discipline; it taught me how to show up for work every day because we work six days a week.”

“I was 15 years old working six days a week but I made that money honey – I got them jeans Jordache jeans.”

Pivoting to Pose, Kelly gushed, “This speaks to me – I almost feel like this TV show was written for me.”

Porter describes the series, about the LGBT ball culture in the go-go 1980s in New York City, as being about “family:”

“That culture is a space where this group of people, often rejected by their family, rejected by society, they’ve come together to create their own family unit. They take care of each other; the choice to live; the choice to choose life; the choice to celebrate life in the middle of the most horrific of tragedies is what this is about. It’s about empowerment, its about self-love, its about family, its about community. And it is the greatest job of my life.”

“We come to these balls which is, essentially, the family reunion, the family gathering. And there are ‘houses’ that are like ‘gay gangs’ and they come together in one space for these balls to walk categories; to walk the aspirational categories that they can’t quite actually achieve in life. And I’m sort of the godfather of the community.”

And speaking of ‘walking,’ when Kelly asks for a lesson in vogueing Porter doesn’t hesitate to step to the floor for pose class.

“It’s posing on the rhythm,” he says. But there’s subtext, you see.

Noting Ryan Seacrest’s rather frumpy body posture, Porter paused to query, “Do you believe in yourself?”

“Present yourself fully to the world,” says the actor as he reached for the sky as the music kicked in. “And rhythm, uh uh; and here, uh uh; and love the people!”

Its really a fab segment. Everyone in show biz is not necessarily great at being interviewed. The clock ticks quick in TV time and you have to be able to get your points across about the project you’re there to share, but also be open and accessible.

Porter is so comfortable in his skin and living life so loud its impossible to not succumb to his charms. Watch below.

For more of the life and sass that is Billy Porter, click the play button below for my interview with the talented actor and singer about his latest album, and a few other topics in our no-holds-barred chat.