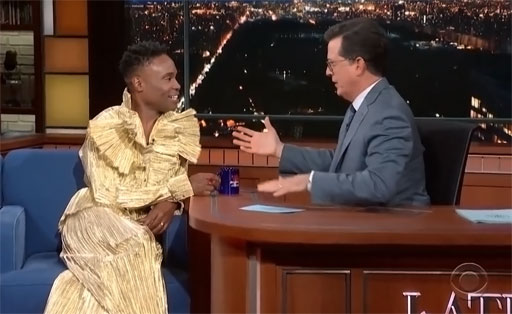 Tony and Grammy Award winner Billy Porter dropped by The Late Show with Stephen Colbert this week to chat on his renowned red carpet looks, the power and politics of fashion, and his acclaimed FX series Pose.

Porter also took the time to give Colbert a little fashion ‘shug’ via designer accessories.

It’s a fun segment, but Porter does get to make some important points about how people view men’s and women’s fashion as political statements.

Remembering Hollywood legend Katherine Hepburn’s penchant for wearing pants back when women simply didn’t do that, it was viewed as “powerful.”

But as Billy says, a man flips the script, puts on a dress, and it’s called “disgusting.”

And why is that? Because men’s clothing is perceived as ‘strong’ while women’s fashion is seen as ‘weak?’

Good questions to think on.

Billy also noted that Jesus wore a dress. So there.