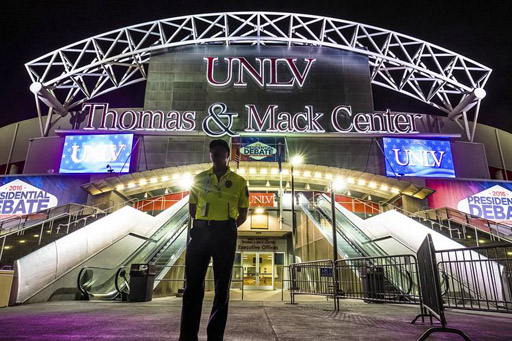 According to the New York Times, the spouses and children of the two presidential candidates will not cross paths as they enter the third and final debate tonight in Las Vegas.

You’ll remember at the last debate, the Trump campaign attempted to seat past accusers of Bill Clinton in the Trump family VIP seating meaning he would have been face to face with the women at the top of the evening.

The Clinton side is not taking any chances at the final presidential debate, on Wednesday night in Las Vegas, and has apparently gained approval of a different protocol for the entry of the candidates’ spouses and families into the debate hall.

The new arrangement calls for the candidates’ spouses to enter the hall closer to their seats, rather than crossing the room, and each other’s paths. That would avoid any potential for confrontations, given Mr. Trump’s penchant for dramatic stunts.

On Tuesday, an aide to Mrs. Clinton declined to comment on the change, and aides to Mr. Trump did not respond to an email seeking comment. It is possible, of course, that further negotiations could result in a different arrangement, if both sides agree, by the time the debate begins at 9 p.m. Eastern.

But the unease over how the candidates’ families interact echoes that of the candidates themselves. At the debate in St. Louis, in a striking departure from tradition, Mrs. Clinton and Mr. Trump did not shake hands at the start, though they did at the conclusion of the 90 minutes.