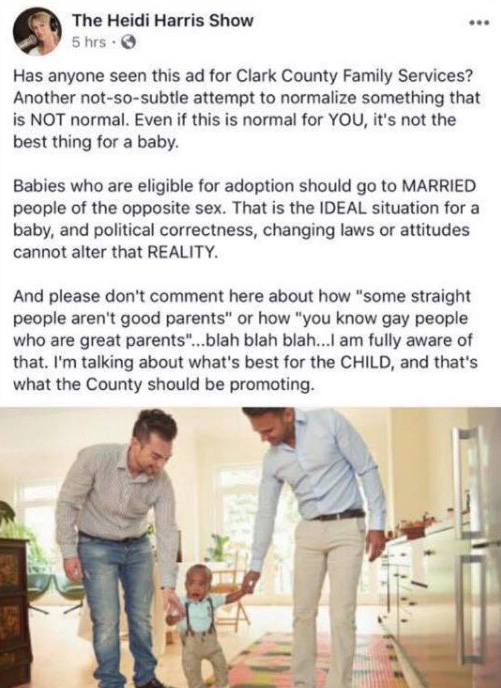 Over the weekend I posted about a Facebook chat I had with a stranger who said there was no point in calling out haters because “you’ll never run out of work.”

You want to know what happens when people raise their voices and point out hate?

Just a couple of days ago, CBS Radio host Heidi Harris decided she had a problem with a new ad here in Las Vegas for Clark County Family Services. The spot included two gay dads with their son.

“Has anyone seen this ad for Clark County Family Services? Another no-so-subtle attempt to normalize something that is NOT normal. Even if this is normal for YOU, it’s not the best thing for a baby.

“Babies who are eligible for adoption should go to MARRIED people of the opposite sex. That is the IDEAL situation for a baby, and political correctness, changing laws or attitudes cannot alter that REALITY.

“And please don’t comment here about how “some straight people aren’t good parents” or how “you know gay people who are great parents”…blah blah blah… I am fully aware of that. I’m talking about what’s best for the CHILD, and that’s what the County should be promoting.”

You know what “reality” CAN be altered? Ms. Harris’s.

Her comment didn’t go over well in Las Vegas, and just two days later Harris’ show is no longer on the air here in Las Vegas.

“Thank you for your email. We appreciate you taking the time to share your thoughts with us and want to assure you that we take comments about our programming and personalities seriously.

“Please note that, effective immediately, The Heidi Harris Show will no longer air on KXNT.” 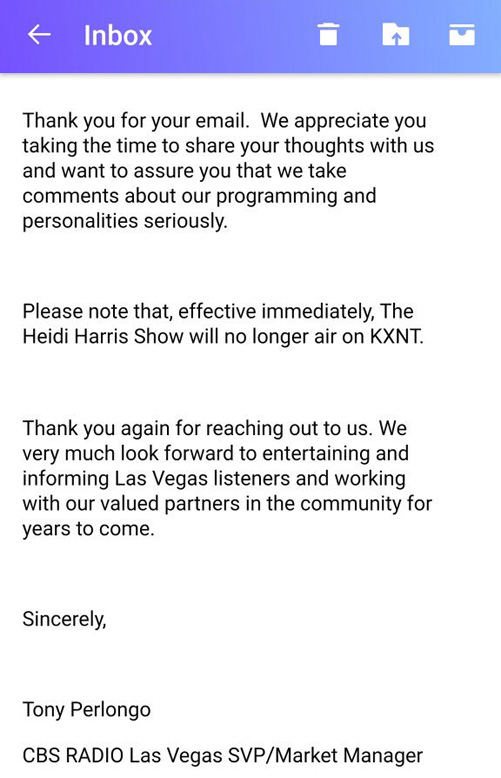