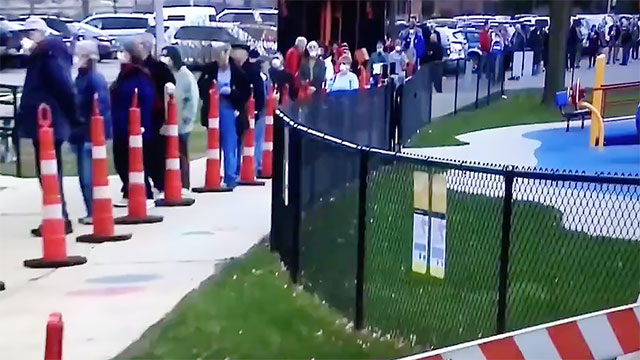 A week after Wisconsin voters were forced to choose between staying safe from the COVID-19 threat and voting in their state’s election, the results are finally being tabulated.

Republican lawmakers in the state forced the elections last week and refused to extend any mail-in vote deadlines primarily because a state Supreme Court seat was being decided and the GOPers know lower turnout favors their side.

But not in this instance.

Even though polling sites in Milwaukee (a Democratic stronghold) were cut from 180 to only 5, the voters did turn out, they stood in line, and they chose the liberal in the race, Dane County Circuit Judge Jill Karofsky.

Her victory marks the first time in a dozen years a Supreme Court challenger beat an incumbent.

Love this. So sorry Wisconsin GOP. Your diabolical plan backfired. Bless these voters in Wisconsin for showing up and waiting in long lines to vote during a pandemic❤️❤️❤️ #Heroes

This is remarkable. Wisconsin GOP forced an in-person election during an unfolding epidemic for a highly infectious disease because they were sure a low turnout election wld ensure a state supreme court win. Unconscionable. And they lost. Amazing. https://t.co/4gcltwaz3L