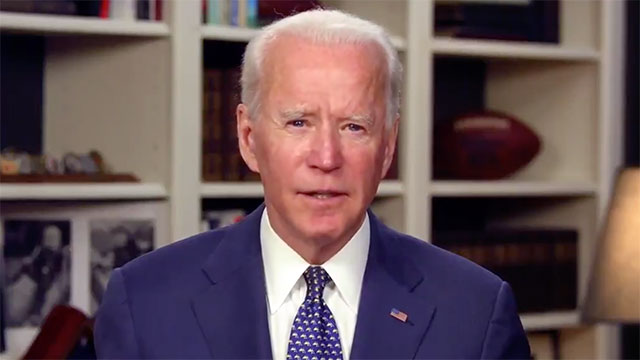 Biden, who attends mass every week and has been public about how he personally embraces his faith, clapped back today during an appearance on MSNBC.

“I think it’s kind of preposterous to a guy who hardly ever darkens the door of a church,” Biden told MSNBC’s “Andrea Mitchell Reports,” in a reference to President Trump.

Biden said that he distinguishes his personal beliefs from policies he sets to implement for everyone.

“My private beliefs relative to how I would deal with the church doctrine is different than my imposing that doctrine on every other person in the world — equally decent Christians and Jews and Muslims and Buddhists, etc.,” he said.

“But the point of the matter is I’m a practicing Catholic, I don’t proselytize about it, I never miss mass,” he added. “It’s part of who I am. It’s what gets me through the really difficult times in my life, and I believe it very strongly.”

Remember, Biden’s opponent has told people publicly he likes to grab women “by the p*ssy.” So, I don’t know that I’d be attacking Biden on the faith level.

Back in the 2016 election, Trump couldn’t name one Bible verse as his ‘favorite.’

WATCH: In RNC speech, Lou Holtz insults Joe Biden by suggesting that Biden is a "Catholic in name only."

Biden has described his faith as "the bedrock foundation of my life." pic.twitter.com/GiGDziWROj

Disgusting lie by Lou Holtz that Biden is a 'Catholic in name only.'

WaPo: "Biden almost always has rosary beads in his pocket … He has written and spoken at length of how faith helped him grieve the loss of his first wife and daughter many years ago, and his son Beau."

Lou Holtz called Biden a "Catholic in name only" so here's a clip of Trump being asked what his favorite Bible verse is. pic.twitter.com/GRy3mCFWtI