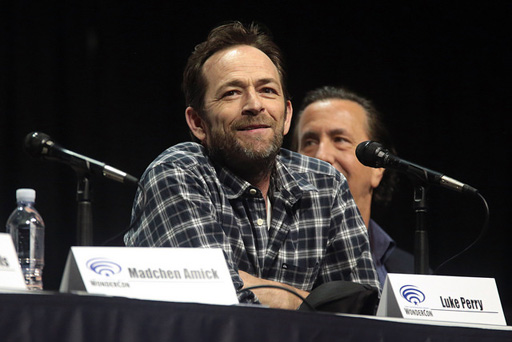 Actor Luke Perry, who shot to fame and teen idol status as loner Dylan McKay in the 1990s hit TV series, Beverly Hills, 90210, has died at the age of 52 after suffering a massive stroke last Wednesday.

TMZ reports that the actor passed away Monday morning at a hospital in Burbank, California.

Originally from Mansfield, Ohio, Perry began his acting career with roles on daytime dramas Another World and Loving.

But he became an overnight sensation with the launch of 90210 in 1990. Over several seasons, the handsome actor handled storylines that shined a light on alcohol abuse and drug addiction, as well as relationship struggles.

Perry starred in the series for several seasons but stepped away in 1995 only to return in 1998. He remained with the show until its finale in 2000.

Most recently, Perry has been starring on the CW’s Riverdale playing the conservative father of lead character, Archie Andrews (KJ Apa).

Perry was not scheduled to participate, but there were reports that he might make an appearance.

The actor will appear posthumously in Quentin Tarantino’s upcoming Once Upon a Time in Hollywood.

Perry is survived by his daughter, Sophie, and his son, Jack.

Dearest Luke,
I will forever bask in the loving memories we’ve shared over the last thirty years. May your journey forward be enriched by the magnificent souls who have passed before you, just like you have done here, for those you leave behind.

Dearest Luke- I am so heart broken and at a loss for words. You my friend were a mighty soul and have left your mark. My love and prayers to the family and all who loved you. RIP— Gabrielle Carteris (@TheGabrielle_C) March 4, 2019

“My heart is broken. He meant so much to so many. Such a very special person. I share my deep sadness with his family and all who loved him. Such a terrible loss." -Jennie Garth on 'Beverly Hills, 90210' costar Luke Perry