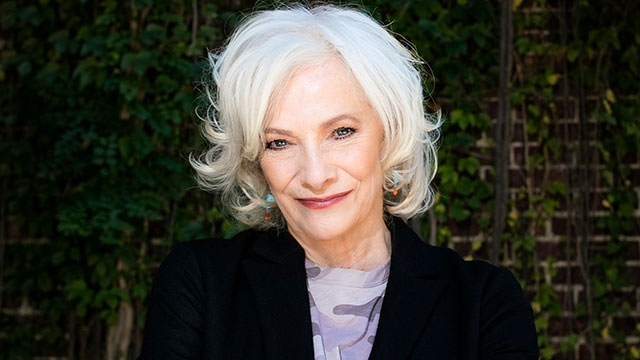 Do not mess with Broadway legend Betty Buckley.

Buckley, a proud Texas Democrat, became aware that the Trump campaign has been playing the recording of her Tony Award-winning performance of “Memory” from CATS at the Donald’s rallies.

Months ago, Sir Andrew Lloyd Webber sent a cease-and-desist letter to the Trump campaign asking that his music not be played at the events, but was clearly ignored.

And so, the mighty Ms. Buckley has now fired off an open letter to the Trump/Pence campaign demanding they cease and desist using her music.

“We must insist that you stop this misappropriation of music and performance that has nothing to do with the representation of your regime. Your presidency, completely devoid of empathy or humanity, is the very antithesis of art.”

She goes on to note his “disastrous mishandling of the pandemic” which is responsible for closing down Broadway and theaters across the country as well as his “super spreader events” which are “undoubtedly exacerbating the problem.”

Buckley also underscores the many artists who, like her, have asked that their music not be associated with Trump’s “deplorable mendacity and ill behavior.” Among those musicians are Elton John, Bruce Springsteen, The Rolling Stones, Phil Collins and many more.

The star closes her epic takedown writing, “The good news is that we, the voters, have the ultimate say. We will reject you at the polls, and by January the utter hell of your presidency, your criminal enablers and regime will be nothing more than a (wait for it) memory.” 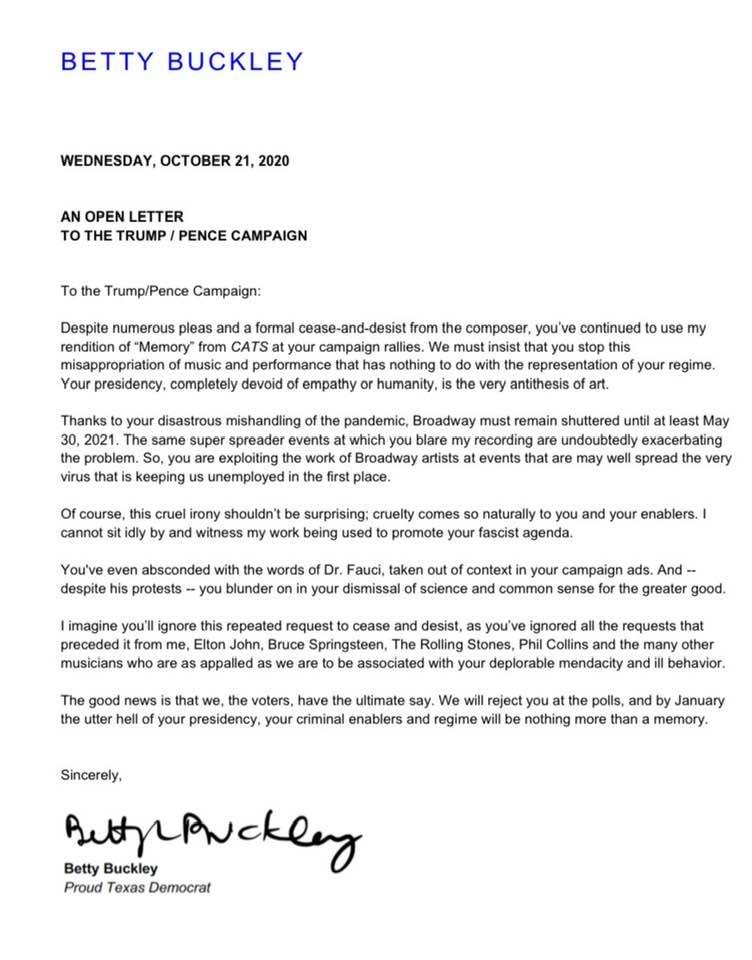 Buckley recently produced a new music video in which she sings a beautiful medley of “For the Beauty of the Earth / Jesus Loves the Little Children” with the School of Arts & Enterprise Virtual Choir in a gorgeous arrangement by longtime collaborator Christian Jacob.

The video was created to promote social justice, turn out voters in her home state, and encourage donations for the American Civil Liberties Union, Save The Children, Black Lives Matter, and Voto Latino.

In a statement, Buckley shared:

“I grew up as a military brat on Air Force bases around the World.  My Father Ernest Buckley was a Major turned Lt. Colonel in the United States Air  Force. Kids of every race and color were my classmates and our neighbors.

“When I  was in the fifth grade my father retired from the military, and we settled in Fort Worth,  Texas. Every Sunday morning we went to the Methodist Church. I sang in the Youth Choir on Sunday evenings. ‘For The Beauty Of The Earth’ is one of my favorite, most beloved hymns. I learned ‘Jesus Loves The Little Children’ when I was very young at  Vacation Bible School.

“It is my hope that via the remembrance of the simple truths contained in the beautiful music and lyrics of these two traditional hymns some persons will feel a call to a soul remembrance of Truth. And it is my hope that the gorgeous faces and voices of the Children of the School of Arts and Enterprise will touch hearts and minds to remember our connected humanity.

“These children, their teachers and families did these recordings from their homes. Over 200 people have participated in creating this project. If this music and the images in this video touch one person, ten or one hundred, it will have been worth it.”

Watch and listen to Buckley’s hymns for humanity below. #Bravo