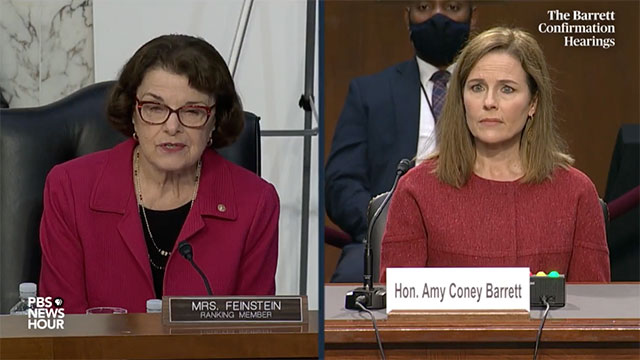 Feinstein asked Barrett whether she believes marriage equality is settled law, but Barrett dodged on giving a clear answer. In public comments, Barrett has previously made it known she did not support the 2015 Obergefell ruling which made marriage equality legal across the U.S.

In responding today, Barrett used the anti-LGBTQ phrase “sexual preference” in referencing sexual orientation indicating that she believes it is a choice. The catchphrase is popular among those who oppose LGBTQ rights and maintain queer people could just choose to be straight if they wanted to.

This is a dogwhistle. The term “sexual preference” is used by opponents of equality to suggest that being #LGBTQ is a choice.#BlockBarrett #SCOTUSHearing pic.twitter.com/kkftq9l2l5

Right: “Sexual preference” the kind of language used by Alliance Defending Freedom, a law firm that opposes equal rights for LGBTQ people (including basic non-discrimination protections) and supports the criminalization of homosexuality.

It’s frightening to hear Barrett use it. https://t.co/BhMlDm1EAs

Barrett used the term “sexual preference,” the big tell that she believes homosexuality is a “choice.”

Which means she believes it can be changed/decided otherwise.

Which means she believes in conversion therapy.

Here is a clip of Sen. Feinstein asking the judge about her thoughts on both the Defense of Marriage ruling which SCOTUS struck down as well as the Obergefell decision.

Feinstein: “Both decisions were decided by a 5-4 margin. Justice Ginsburg was in the majority. Justice Scalia dissented in both cases. You said in your acceptance speech for this nomination that Justice Scalia’s philosophy is your philosophy. Do you agree with this particular point of Justice Scalia’s view that the U.S. Constitution does not afford gay people the fundamental right to marry?”

Judge Barrett: “If I were confirmed, you would be getting Justice Barrett, not Justice Scalia so I don’t think that anybody should assume that just because Justice Scalia decided a decision a certain way that I would too. But I’m not going to express a view on whether I agree or disagree with Justice Scalia for the same reasons that I’ve been giving.

“Now, Justice Ginsburg, with her characteristic pithiness, used this to describe how a nominee should comport herself at a hearing. ‘No hints, no previews, no forecasts.’ That had been the practice of nominees before her but everybody calls it the Ginsburg rule because she stated it so concisely and it’s been the practice of every nominee since. So I can’t, and I’m sorry to not be able to embrace or disavow Justice Scalia’s position but I really can’t do that on any point of law.”

Feinstein: “Well that’s really too bad because it’s really a fundamental point for large numbers of people in this country. I understand you don’t want to answer these questions directly but you identify yourself with a Justice that you, like him, would be a consistent vote to roll back hard-fought freedoms and protections for the LGBT community. And what I was hoping that you would say is that this would be a point of difference where those freedoms would be respected and you haven’t said that.”

“Like racism, I think discrimination is important. On the questions of law, however, I just, because I’m a sitting judge and because you can’t answer questions without going through the judicial process, can’t give answers to those very specific questions.”