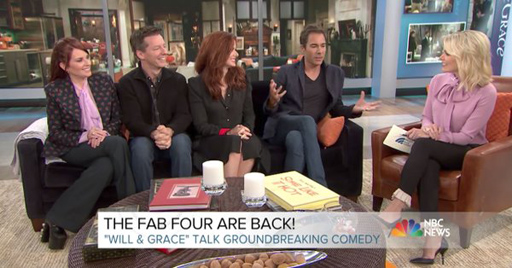 This article has been updated since it’s original posting.

Monday saw the launch of Megyn Kelly’s Today Show and it seems she’s going to need some time to find her “light-hearted morning show” banter.

Speaking with the cast of Will & Grace, the former Fox News host introduced a superfan of the iconic 90s sitcom, Russel Turner, from the audience.

Things got a bit awkward from the get-go.

“Is it true that you became a lawyer—and you became gay—because of Will?” Kelly asked the excited Turner.

Fortunately, Turner was quick on the fly: “I look at Will Truman, I’m like, ‘He has it made.’ Lawyer, best apartment in New York, and gay? Come on, trifecta.”

After surprising Turner with tickets to Los Angeles to a taping and backstage tour of Will & Grace, Kelly closed out the segment with another graceless turn of phrase: “I don’t know about the lawyer thing, but I think the Will & Grace thing and the gay thing is going to work out great!”

UPDATE: Debra Messing took to her Instagram afterwards to say “Honestly I didn’t know it was MK until that morning. The itinerary just said Today show appearance. Regret going on. Dismayed by her comments.”

She later deleted that comment but several folks screen-capped it.

Here is Megyn Kelly telling a gay #WillAndGrace superfan, “I think the ‘Will & Grace’ thing and the gay thing’s gonna work out great.” 😑😑😑 pic.twitter.com/KyN9kVQ0rK

This Megyn Kelly #WillAndGrace interview has us cringing so hard https://t.co/YwqXdbGZ1d

Megyn Kelly is every mom trying waaaaay to hard to “relate” to her gay son but instead just makes it waaaaay worse pic.twitter.com/dh2sSi2kVq