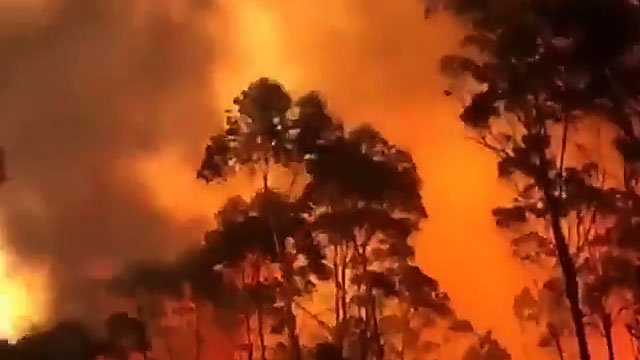 My husband Michael and I are devastated by the apocalyptic bushfires spreading across Australia for months now. And they show no signs of slowing down.

According to reports, about 12.35 million acres have burned, destroying more than 1,400 homes and killing at least 23 people.

It is estimated that more than half a billion wild animals have died in the fires. Entire towns have evacuated to the shores and volunteer firefighters have left their families and careers behind to fight the flames around the clock.

If you feel inclined to help, it seems the leading organization to donate to is the Australian Red Cross.

Additionally, the NSW Rural Fire Service has a donation page to support the firefighting efforts in New South Wales.

This is Mallacoota in Australia

The entire city is surrounded by flames

This is what the world will look like if we don't tackle climate change pic.twitter.com/JarYiSjVet

Another difficult day for communities around NSW. At midnight, with the threat still not over, there are 7 fires at Emergency Warning and 11 at Watch & Act. A state-wide total fire ban remains in place for Sunday, 5 Jan. #nswrfs #nswfires pic.twitter.com/jopBiTrHZT

The middle of the day at Main Beach, Merimbula. Streaks of black ash brought in with the tide stretchs along the beach. The oval behind is full of evacuees, all some have is their car and a tent #AustraliaBurning #AustraliaOnFire pic.twitter.com/JKKqgx8sOo

Astonishing bravery from the firefighters on the ground in Australia.

It’s hard to really appreciate the level of destruction until you see it like this. 😔 pic.twitter.com/JxMZtFsaLz

Thoughts and prayers with everyone in Australia 🇦🇺🇦🇺

A desperate koala suffering through the soaring temperatures in South Australia approached a group of cyclists to drink from a water bottle. pic.twitter.com/48aIYntQgd