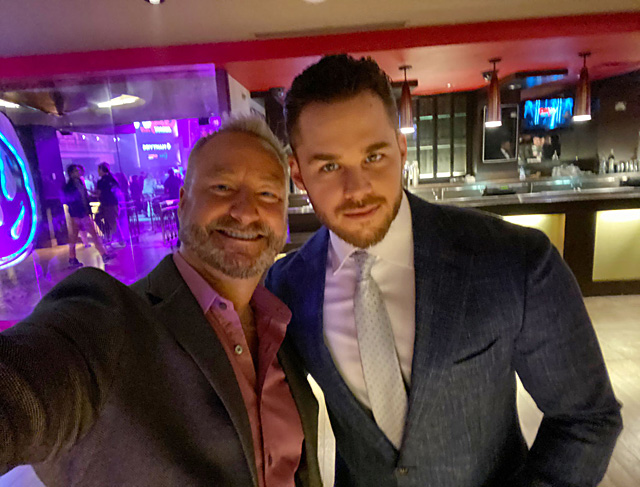 The 2020 GayVN Awards were held Monday night at the Hard Rock Hotel & Casino in Las Vegas and it was quite the gay affair.

I’ve never attended an awards show for adult entertainment, so I was super curious as to how this would all go down (no pun intended).

One thing I did learn – when picking up your credentials, don’t stand in the background while Cutler X is taking a photo because he will yell at you for “photo-bombing.”

Now, the awards show did begin an hour late (is that called being on ‘gay time?’), but what followed was an impressive and well-produced event by ManyVids.

Alec Mapa returned to hosting duties this year alongside new co-host comedienne/TV host Nicole Byer. Plus, there was musical entertainment by King Princess and a special performance by Alyssa Edwards.

At the event, Dallas Steele (nominated for Best Group Sex Scene and Favorite Daddy) told me he feels the event helps to de-stigmatize the industry.

“You look around at all these beautiful, well-dressed people,” said Steele. “If my mom were still around I’d be proud to have her here. I think it’s incredibly positive about our industry.”

Brian Davilla (nominated for Favorite Bear, also directed nominees in Best All Sex movie and Best Group scene) said his favorite aspect of the night was the sense of family among a group of people he warmly termed a ‘weird fraternity.’

Some history was made and a barrier broken as DeAngelo Jackson became the first Black performer to take home the trophy for Best Actor for his work in Blended Family:

Cade Maddox won for Performer of the Year:

Check out some of the attendees on the red carpet:

I also got to meet the oh-so-handsome Matthew Camp, who was nominated for Best Actor for his performance in Camp Chaos.

A year ago, I interviewed Camp about the then-upcoming project and I am happy to report Camp is even more impressive in person as he was warm, thoughtful and charming in our short conversation.

Here’s the interview with Camp in case you missed it:

Here is the full list of winners for the 2020 GayVN Awards:

Performer of the Year – Cade Maddox